Opportunity and luck are sometimes one and the same, especially concerning sports. Most athletic experiences can be dwindled down to a few moments of opportunistic fortitude where the “lucky participate” takes matters into their own hands.

The NBA community has feasted on the recent Warriors drama which presented a prime opportunity for the Mavericks. They took full advantage of the turmoil by handing the Warriors their 6th loss of the season. This was followed up by a lackluster performance versus Memphis where we saw a 4th quarter drought cost the Mavericks down the stretch. Clearly, a theme of inconsistency stands solid.

Let’s start with the obvious. No Steph Curry, no Draymond Green and an agitated Kevin Durant aided the Mavs in Saturday nights win. Monday’s loss can be attributed to poor shooting, specifically fourth quarter shooting which ended the chance at a .500 record.

Maverick opponents have a combined winning percentage of about 45%, however, the four-game winning streak includes 3 wins versus teams with records of .500 or better. To this point, the schedule hasn’t been particularly tough as they have only faced four teams with ten or more wins (TOR, OKC, GS, MEM). In those games, the Mavs are .500 with wins over OKC and Golden State. In both victories, each team was without their most essential player (Curry & Westbrook), which ultimately secured each win. We should review these factors before placing unrealistic expectations on the squad because context clues suggest this team isn’t there yet.

As a fan, it can be difficult to remain objective and unbiased as the team shows promise. Too many times fanatics expect too much and set themselves up for disappointment when reality is staring them square in the face. Remember a teenager and a 20 year old are key members of the team we support and they are still developing.  The notion of Dennis Smith Jr. being trade bait is unfounded and basic video game rhetoric no one should entertain. Smart teams don’t draft talent without solidifying what they have in a player. Mark Cuban and company have done an outstanding job of erecting a plan and sticking to it. The ability of Luka Doncic and DSJ deserves patience if the goal is to remain competitive in coming years. I more than most have been a huge advocate of a playoff push but it shouldn’t negatively impact how the team is built moving forward. Entering the playoffs would be great for the team’s morale but could cost Dallas a top draft pick. 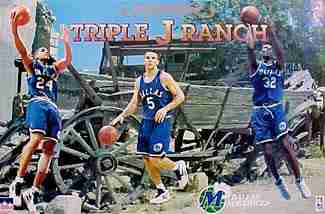 Sometimes experience can be the best teacher. MFFL’s reminisce on how  90’s phenomenon “Triple J Ranch” was created. It could be the blueprint of the future. All-Stars Jimmy Jackson (1992) & Jamal Mashburn (1993) were drafted only one year apart.

While future Hall of Famer Jason Kidd joined the squad in 1994. Take solace in knowing the club has placed a high value on its draft picks, investing in the future. If the past serves as a precursor we are merely one draft pick away from our own version of “Triple J Ranch”.