Following the Dallas Stars’ victory over the Florida Panthers, the Stars hosted the New York Rangers in an alumni game. The ninth annual event played by former NHL players. Those who bought tickets for the Stars, Panthers game could use their ticket for admission to the game.

At the alumni game, fans had the opportunity to win cool prizes. Such as mystery pucks, game work jerseys, and game worn jerseys. All proceeds raised go to the Dallas Stars alumni association.

Sunday night January 8th saw many generations of Stars on the ice. A roster of the guys skating in the game was released for who is taking the ice after January 8th vs the Panthers. An interesting mix of guys of different ages who skates for Dallas in different decades.

Highlighting the Stars’ roster were a few Cup champions from that 1999 team. Eddie Belfour, Craig Ludwig, Darryl Sydor, Brent Severyn and Brad Lukowich. We cannot talk about Stars’ history without getting guys from that 1999 team into the conversation.

While the alumni game was kept largely private, we do know that the former Stars played the former Rangers following Dallas’ victory over Florida. Living in the age of internet, and social media some details of the game had been leaked to the public. Such as the final score of the game. A rather high scoring affair for a game that was decided in two halves as opposed to the traditional three period games.

The former Stars defeated the former Rangers by a score of 8-7. A high scoring affair from a bunch of guys who have been there, and done that. Also guys who wanted

A local charitable cause

For the alumni game, profits raised went to a charitable cause. For the Dallas Stars alumni association, proceeds go to helping out the Dallas community. From engaging with fans in the Dallas metroplex to homeless shelters in the area. Former Dallas players want to give back to the city that has given them so much. 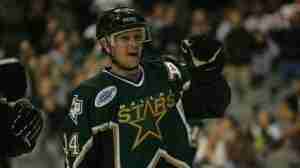 Many former Stars have played hockey in Dallas, and continue to have roots in Dallas. Such as former Star Stu Barnes, who was with Dallas from 2002-2008. “The chance to be able to do things within the community that supported us over years is a great opportunity.”. Barnes said back in 2012. Who since was also an assistant coach for the Stars in the 2017-2018 season. Still having affiliation with the Stars’ alumni to this day.