On October 20th, the Dallas Stars unveiled their latest reverse retro jersey. A jersey that went over a lot better with Stars fans, as well as NHL fans in general alike than the ‘storm trooper’ jersey did in 2021. A jersey we are likely too see after one year. Most agree that the callback to the legendary 90s Star logo is one of the best retro jerseys in the league. Here we will breakdown how the Stars performed in their new alternates.

Dallas went on to wear the iconic jerseys five times. Which consisted of a couple games vs division rivals in the Winnipeg Jets, and the Minnesota Wild. Two old rivals in the Detroit Red Wings, and the Anaheim Ducks. As well as a match against the stories Montreal Canadians. All of these matchups were played in Big D.

The Stars kicked off their new look retros vs the Jets on November 25th. Despite a three point game from Jason Roberson (two goals and three assists), the Stars fell to the Jets in overtime by a score of 5-4. While losing in overtime in a rubber match to a division rival is never fun,the Stars did rally back from being down 4-2 to force ot.

Not the first impression the Stars were looking for especially against a divisional rival, but it was only November. Teams with a new head coach often spend their first couple months of the season ironing out their game plan to build on, and their identity as a team.

Jason Roberson also had a hat trick in the game. Two Roberson’ three goals were on the power play. Highlighting one of the NHL’s best teams on the man advantage.

In a wild afternoon game (no pun intended) on December 4th, the Stars fought back to earn a point in the standings in an overtime loss to the Minnesota Wild. Trailing 5-1 with 12 minutes left, the Stars clawed back with four goals to force ot. Where the Wild went on to score, and won 6-5 in overtime for their second point.

While it might not be a blueprint on how to start a game, the Stars can at least be happy with gaining some ground in the standings after the game seemed like a lost cause. Especially at home where fans will often boo, go silent, and leave a game early.

December 10th saw an old rival come to town. A teeter totter affair that saw the Stars win their second, and second straight win past regulation. Beating the Red Wings 3-2 in overtime. Providing the depth scoring, and the ot winner was 22 year old defenseman Nils Lundkvist. Who is also a fan of 3 on 3 play.

“I like 3-on-3, I think it’s fun,” Lundkvist said. “It’s more ice and you can skate a lot, and usually it’s creating a lot of scoring chances. Right now, everybody just tried to keep the puck, though. Happy we got a 2-on-1, and [Marchment] made a very great play and I just could touch it into the net.”

To cap off their five games wearing the retros, the Stars faced off against the Canadians. Against an original six team, the Stars doubled up the Habs with 19 year old Wyatt Johnston with a late game winning goal. 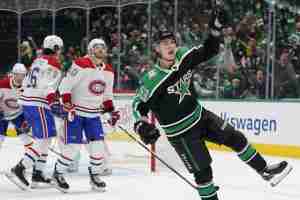 It was yet another comeback win for the Stars. Who trailed 2-0 with just over two minutes into the second period. The Stars got their legs underneath them after a slow start. Fought back to tie the game,and would go on to win it.

A point in all games played

In five games sporting the retros, the Stars put up a record of 3-0-2. Good enough for 8 out of 10 points in the standings wearing the fan favorite alternate jersey. It was also at least one point in every contest played. It’s safe to say the Stars played up to the brilliant design of the jersey.