From October 27th to December 6th Stars fans, and the rest of the NHL were treated to an 18 game point streak that set a Dallas franchise record. That’s over a month of production on the score sheet. Going on to post the longest point streak in Dallas history. Overall second longest point streak in history. Trailing only Brian Bellows ‘ 20 game stretch with the Minnesota North Stars back in 1986.

Highlighting Robertson’s point streak came on December 1st when the Anaheim Ducks came to town. He achieved the hatty by scoring a goal in all three periods of the 5-0 shutout vs their rival. That’s what you call a full 60 minute effort. Talking about his three goal game Robertson kelp it simple, and stayed humble.

“I’m just getting in position to shoot the puck, I mean, just got to get it past the first guy and get it on net,” he said. “It was just playing hockey and picking my head up, and seeing what’s available. … And it’s credit to guys who you don’t see on the scoresheet, the person who is screening the goalie.”

Throughout the month of November, Robertson had a point in every single game (14 games played). Including multiple point games in nine out of 14 contests. Another fun fact; Robertson became the first player in NHL history to lead the entire league in both goals, and points for one calendar month.

Catapulted by his November dominance, Robertson got the conversation going for his name being thrown in the Hart trophy discussion. The annual award recognizes the votes most valuable player during the regular season in the league. An award that has not yet been won by a Star to date. 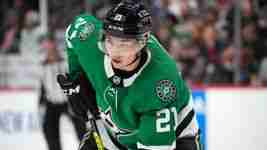 Not only was Robertson scoring in November he’s been doing it all year. Leading the team in goals, and points. As well as being more than a point per game player are the kind of numbers that get you in the talks for the coveted award. Robertson will more than likely be in the mix with Connor McDavid, Sidney Crosby, and Mitch Marner.

One of the league’s tops in goals and points

Amongst the goal scoring leaders in the NHL, Robertson also has a shot at a couple of objective awards; the Maurice Rocket Richard, and the Art Ross Trophies. The Richard trophy is handed out yearly for leagues best in goal scoring. That would also be a franchise first if Robertson wins it. For the Art Ross trophy, the award is for top point getter for the season. Won by Jamie Benn in 2015.

Tonight vs the Carolina Hurricanes, Roberson had three points (all assists in the Stars’ 5-4 overtime loss. Currently it counts as a one game point streak, and before mid April we could very well see another remarkable point streak from Roberson.