Wednesday, February 1st, 2023
THE LATEST
Home Mavericks All eyes on Coach Kidd to step up

You wouldn’t be in the minority if you claimed that the Mavericks have fallen short of expectations in the 2022-23 NBA season.

Sure, you lose a key piece in Jalen Brunson, but go out and make a deal to acquire a center who can score at multiple levels. Also, Spencer Dinwiddie can fill the ball handling hole left by Brunson’s departure, right? Oh and ‘don’t forget about Frank Ntilikina and Tyler Dorsey’ GM Nico Harrison said.

Of course, Luka Doncic has carried a monumental work load beginning this season off. This doesn’t necessarily come as a shock, but the narrative that ‘Luka needs help’ continues to grow when losses pile up.

I don’t think most would disagree that this roster could definitely use a tweak or two, but how much of the shortcomings should coaching be to blame? The magnifying glass is focused heavily on Coach Kidd and how he can compile wins with the current constructed roster.

When Coach Kidd was asked how the team could improve, he responded ‘just make shots’. And as eye rolling as that is to hear, he’s not necessarily wrong. Offensively, the Mavs have been doing a good job at getting good looks. When players aren’t knocking those looks down, it makes it tough to win ball games. 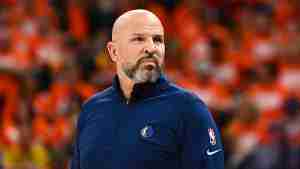 Tim Hardaway Jr. was off to a slow start coming off his injury, but is now looking more like himself as he gets more games under his belt. We can only cross our fingers that Reggie Bullock follows suit. Keep in mind, last season both of these players were off to a slow start before finding their rhythm and coming up big throughout the year.

With the inevitable ups and downs throughout a season, as of late the Mavs have looked better. They won three straight, two of which on a back to back that included a road game in the Mile High.

This streak was ended by the Bucks, who essentially knew the final play the Mavs ran out of a timeout. The result? A heavily contested look for Luka well beyond the arc.

There are plenty of fingers to point, but as a whole the Maverick’s coaching staff needs to step up.