Friday, February 3rd, 2023
THE LATEST
Home Stars A Look Back at Scott Wedgewood; From Miraculous Saves to Injury to Recovery

On November 17th play at the Florida Panthers in Sunrise Scott Wedgewood made not one, but two incredible saves in one sequence for the Dallas Stars. It helped Dallas en route to a road win. Already one of the biggest highlights of the Stars’ young season.

Short handed breakaways are some of the most difficult for a goalie to stop. The team in front of you is dialed in on the man advantage with scoring in mind. One little leak, and the flood gates break open the other way. And of course we cannot talk about Wedgewood’s spectacular play without the injury that followed immediately afterwards.

In no time after his heroics in net Wedgewood went down, and immediately had to leave the game on a stretcher. Right after making two incredible saves Wedgewood took off his blocker, and reached down for his lower back. He then collapsed onto the ice before he got help getting off.

Stars’ Head Coach Pete DeBoer with the press after the win win against Florida, and said Wedgewood was “day to day” going forward. Before going to a hospital in town, Wedgewood was able to get to the dressing room on his own. A good sign going forward.

The next day after being taken off the ice by a stretcher, Wedgewood quickly regained his form. For the upcoming game hosting the New York Islanders on October 19th (where the Stars won five to two) he was back to backing up Jake Oettinger in net. Taking no time in solidifying the Stars’ goaltending tandem one game later.

With the proper meds, and a little rest Wedgewood confirmed that after being stretchered off the ice he was good to go. Just after a short trip to the hospital in Sunrise, Florida he was able to get full motion back, and feel completely fine doing so. Showing that thankfully the scare on ice wasn’t as bad as it might of looked.

“Few steroids to settle the body down, then I was able to stand up,” Wedgewood said. “Little bit of a hunchback feeling after the game and on the plane and stuff. But woke up the next day feeling pretty good. Was able to skate this morning and had no issues.” 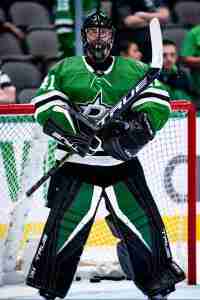 Back in the lineup

Since the injury while visiting the Panthers, Wedgewood has been a regular backing up Jake Oettinger for the Stars. Tonight he also got the start in Denver playing the Colorado
Avalanche.