Something is different about this Dallas Stars team than the one in recent years. Something that the rest of the NHL is surely taking note on. While the Stars are still known for their defensive identity, and their stellar goaltending the team is scoring much more than before. The clear number one reason for this shift in scoring production has been new head coach Pete DeBoer.

Last season it was no secret that the Stars had trouble finding the back of the net. Finishing ranked twenty second overall in goal scoring last year. After a first round exit to the Calgary Flames, the Stars got a new coach shortly after. Pete DeBoer has coached a more north/south, aggressive gameplay that shows in the goals for column. Even more good news, the defense has not suffered for it.

As well as the Dallas Stars have started off the season, there’s still no doubt who the top guys are in scoring. Just last weekend Joe Pavelski notched the team’s first hat trick of the season. With his fellow linemates finding the point column too.

Joe Pavelski spoke with the media after his four point performance vs the Montreal Canadians last weekend. “I think we understand what that team is over there,” Pavelski said. “They have a lot of firepower. They’re playing fast, they’re playing with some confidence, so the challenge for us was, it’s early, we’ve been playing good, don’t take these guys light because they’ve put it on some teams early. If you mess around with the puck, they can turn and burn and get to you. And you saw that at times. When they had the momentum, they were coming.

“‘Jakie’ was solid, made all the saves, calmed it down a bit there, and I think our forecheck kind of took over the game there at times.”

The aforementioned ‘Avengers Line’ of Joe Pavelski, Roope Hintz and Jason Roberson are the top guys in scoring. Having other guys like a healthier Tyler Seguin, Mason Marchment, and Ty Dellandrea scoring it gives the team more guys for other teams to worry about trying to shut down. The Dallas Stars are looking less, and less one dimensional on offense. We also still have a skilled 200 foot defensive unit led by Miro Heiskanen, too.

“I don’t think any anybody has had a tougher three or four months than Mason,” said Stars coach Pete DeBoer. “I can’t tell you how impressed I’ve been with how he’s handled it, how he’s come into camp, how he’s integrated in our group and how well he’s playing. He’s been one of our best players. He’s been a huge addition for us.” 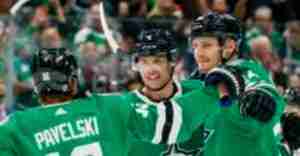 Currently in a playoff spot

The season is far too young. But already nine games into the season, the Stars are sitting the top three in the central division. Which is a spot in the postseason bracket. Even with today’s loss to the New York Rangers, the Stars are still in the top three of the central division. When Miro Heiskanen comes back from injury, and as long as Jake Oettinger is ok Dallas will be a better hockey team again.