This past weekend the world lost a legend. Former NBA player Kobe Bryant died in a helicopter crash in southern California. He was with his 13-year-old daughter, Gianna, who also died in the crash.

They were on their way to a basketball game.

In all nine people died. It is heartbreaking thinking about not just the Bryant family, but all the families that are missing mothers, daughters, sons, brothers and fathers. Kobe touched millions of people, possibly — probably? — more. He was a guy who played basketball but he transcended basketball. He transcended sports. He was also a family man. He even managed to transcend that.

Kobe Bryant was also a huge soccer fan, especially of European clubs like AC Milan and Barcelona. He started playing soccer in Italian parks when he was just six years old when he couldn’t find a game of basketball. He was an exceptional athlete.

Several of the FC Dallas players paid their respects to Kobe on their social media channels.

Newly acquired midfielder Fafa Picault paid tribute on his Twitter feed. He said, “My heart can’t take this. I looked up to you in so many ways, I wanted to be like you. You inspired me to overcome every hurdle and obstacle in my career and life.” 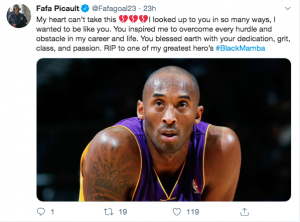 You blessed the earth with your dedication, grit, class, and passion. RIP to one of my greatest (heroes). #BlackMamba”

Jesus Ferreira posted a video on his Instagram story showing Neymar honoring Kobe after scoring a goal by holding up two fingers and four fingers, in honor of the number 24 Kobe wore with the Lakers, and pointing to the sky. 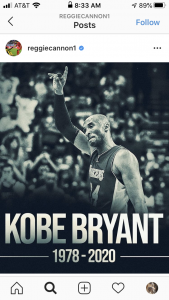 Reggie Cannon said via his Instagram: “Rest in Peace to one of the most inspirational men to walk this Earth. Is a very dark day but I know heaven gained more angels today.” He also mentioned Kobe’s wife, Vanessa, her family and all the family members on board the helicopter who died. “I pray for Vanessa, all of his family, and all aboard affected by this tragic accident, and I couldn’t begin to fathom the pain they must be going through. We must all cherish life when we have it. Thank you for being a role model for us all; Thank you for everything. RIP Kobe.”

Ziegler told Dallas Sports Nation, “Kobe was a great competitor, always professional inside and outside the field. I remember him really well twice winning the Olympic gold medal and being a five time NBA champion. But he has always been humble. great leader and example for all sportsmen not only basketball players.”

People may have disliked Kobe because of his style of play or his trademark smirk, but no one could deny his talent and his drive to win. Anyone who has played any basketball at all knows how Kobe made the impossible look easy. Even in his last season, when his body was slowed by age, he still made great players look average.

He will be missed on this physical plane, but his words, his actions will continue to inspire people from all over the world. Even from beyond, his words echo back reminding us all to live our dreams, calling us to take a chance and commit to a life that is special, different.

Kobe once said, “The most important thing is to try and inspire people so that they can be great at whatever they want to do.”

He showed us all what is possible, not just in professional sports, but in life. We all have something inside of us that is calling us to show up, do the work and leave a mark on life.

The Mamba wanted to be great at basketball. What do you want?

How did Kobe Bryant inspire you?