FC Dallas plays their first playoff match of the 2019 campaign as the boys face off the Seattle Sounders at CenturyLink Field.

This will be the third time that these teams have faced each other this season. The first game between the two teams occurred in June, when the Sounders came to Toyota Stadium and left with a disappointing 2-1 loss. The other match-up happened less than a month ago, when FC Dallas visited Century Link and left the state of Washington with a point after a rather uneventful 0-0 draw. FC Dallas has a struggling record against Seattle, with an overall record of 6 wins, 5 draws, and 14 losses. FC Dallas has had an extremely poor record when they’ve visited CenturyLink. The club is 1-2-9 in Seattle, with that victory coming in 2011.

The Sounders have had a pretty good season. With Raul Ruidiaz on their squad for a full season and Jordan Morris healthy for the first time since signing with his hometown team, they’ve been able to consistently play well against MLS opponents.

Although their attack has been consistent, they have played relatively poorly in defense, especially since Chad Marshall retired in the middle of the season. Regarded as one of the best defenders in MLS history, the loss of Chad Marshall has left a massive gap in defense. Roman Torres, the player who was expected to fill this gap, was suspended for 10 matches due to the consumption of a PED. This lead to the signing of DP Xavier Arreaga, an Ecuadorian centerback. Although he has some raw talent, Arreaga has struggled since coming to the MLS, receiving two red cards in 12 starts.

Roman Torres returned to action on October 6th, where he scored the game-winning goal against Minnesota United FC in the last game of the season that propelled the Sounders to 2nd place.

FC Dallas are coming off of a resounding 6-0 victory at Toyota Stadium against Sporting Kansas City, a match that pushed the club into 7th place, the last playoff position, on the last game of the season. The star of the match was Zdenek Ondrasek, who scored 2 goals against SKC, a side who was already eliminated from playoff contention.

MLS changed the playoff format from last year to accommodate for the international breaks that occur in early October and late November. It will be the first time that the playoff format is decided by one leg instead of two. The placement in the regular season standings is what dictates who is the home team in the playoffs, which is why FC Dallas is flying over to Seattle. This will be the continual trend for FC Dallas if they progress through the playoffs, as they were the team with the least amount of points of all the Western Conference teams in the playoffs. The Goalkeeper position and the defense will in all likelihood stay the same, as it has for the majority of the entire season. Bryan Acosta will probably also start in this match, even though he is one of three players on this roster that returned from international duty in the middle of the week.

Zdenek Ondrasek has been on a tear in the MLS and on the international stage, where he had a goal and two assists in two appearances off the bench for the Czech Republic. He has been one of the best players in the league since August, and has scored 7 goals and had 2 assists in his last 7 MLS appearances.

The rest of the team is up in the air. Dominique Badji has been Luchi’s go-to guy for that left wing spot for the entire season, but he has under-performed in most of his appearances this year. Mosquera has been injured and has shown inconsistency over the season, but that performance against Sporting KC may be too much to ignore.

Although Ferreira has started ahead of Pomykal for the couple games, it seems unlikely that the club will not play its star player in a playoff match. Plus, Ferreira has played relatively poorly over the past couple of matches, especially against Colorado 3 weeks ago. 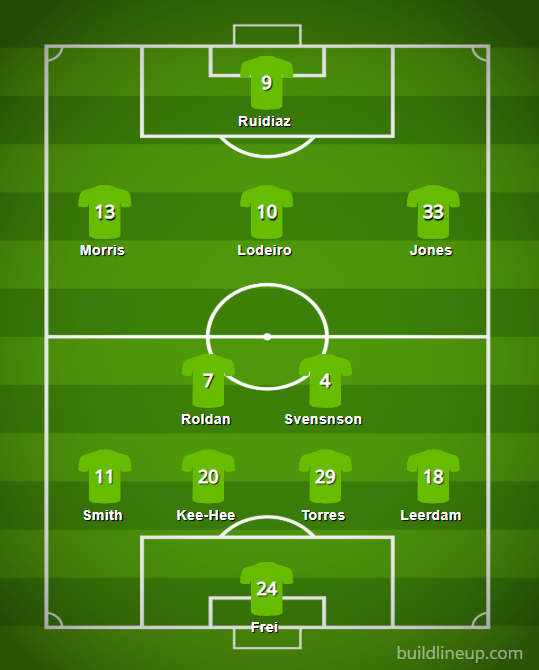 The Sounders have had the same core of players for the entire season. There has been some rotation in the lineup over the past couple of matches, but on paper, this is their starting squad. Also, Cristian Roldan and Jordan Morris did play Tuesday night for the US against Canada, but that will probably not deter them from starting this match.

Roman Torres came back to the starting lineup on the last game of the season, which was very helpful for Brian Schmetzer because Xavier Arreaga received a red card the match prior to the one against Minnesota. Even though Xavier Arreaga has been the starter for the second half of the season, I sense that Schmetzer will lean on experience heading into the playoffs.

Keys to the Match

FC Dallas got their first point in Seattle this season for in a while, and looking back to the that match, it was a perfect tactical game to replicate. Luchi started Barrios in the striker role for the first time this season. What this allowed Barrios to do was to target the centerbacks, which were Xavier Arreaga. Luchi suspected that FC Dallas would be on the defensive for much of that game, so he used Barrios as an outlet to jump-start FC Dallas’ attack and create counterattacking opportunities. Even though FC Dallas did not score, Barrios was a handful for those centerbacks: Kim Kee-Hee had three fouls, and Xavier Arreaga received (you guessed it) a red card in the 86th minute.

I don’t think Luchi should start Barrios up top: Cobra has been too good to not play, and it would be risky to play a relatively untested tactic in a playoff game. However, if Barrios targets the centerbacks, it might create opportunities for FC Dallas in this match.

I suspect, as I’ve said previously, that Paxton will play in the attacking midfielder role, but it might be Jesus.  Whoever is playing that role will have to break the Seattle midfield.

The Sounders have started both Roldan and Svensson in the defensive mid positions all season. Both of them are crucial to start the Seattle attack, as they both cover the defense while also drive the play forward by giving the ball to either the wingers or to Nicolas Lodeiro. They have both been extremely difficult to break through. Whoever is playing the attacking midfield will have to be able to play through them in order to give the ball to the FC Dallas attackers

Luchi has already shown a positive attitude in interviews when it comes to the playoffs, which shows that he has a true desire to win it. This attitude needs to translate to the players. In all the losses that the fans have seen this year, the main reason behind these losses has been a loss of enthusiasm on the pitch, where the players play slow and seem uninterested. In a game where the winner goes through, the players can’t afford to have this attitude.

This is the first of the four games that the boys need to win in order to get some silver ware this year. Will they defeat the odds and get through?  Or will they bow out of the playoffs for the fourth time in five years? Let me know in the comments!