The Cowboys breakout wide receiver star, Michael Gallup, will miss 2-4 weeks with a knee injury. Gallup was highly anticipated and was considered to be a much improved second-year player.

He started the season with 226 yards in the first two games, leading Dallas’ receivers. The Cowboys will still have Amari Cooper and Randall Cobb, but Gallup’s injury will leave a hole in the Cowboys offense.

Gallup’s replacement, Devin Smith, had a standout week against the Redskins.  He caught three passes for 74 yards and a touchdown.  His touchdown catch was a 51-yard bomb connection from Dak Prescott to put Dallas’ first points on the board. He had a pretty impressive week for a guy who not many people have heard of.

Devin Smith’s story is a great one. The Ohio State receiver was selected in the second round in 2015 by the New York Jets. Smith played in ten games, catching for 115 yards and a touchdown before tearing his ACL. His recovery took a full year and he played in only four games the next season before tearing the same ACL. He did not appear in another game for the Jets and was eventually released.  The Cowboys signed him in January in hopes of reviving the young wideout’s career. 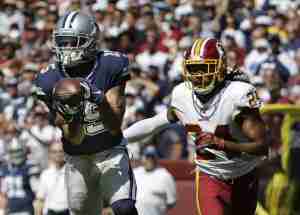 Devin’s teammates had nothing but good things to say about his ability.  Former Ohio State Buckeye teammate Ezekiel Elliott said, “He’s a guy I’ve known since college; we played together at Ohio State, won a national championship together. He was a phenomenal player in college. His years in the league, he’s been dealing with a lot of injuries. I told everyone he was a special player when we picked him up in the offseason, and he proved that he belonged here. And today, he made some big plays.”

When Amari Cooper was asked about his big 51-yard touchdown and he simply said, “That’s who Dev is.”

Kellen Moore has the ability to keep this offense on track while losing their top receiver by plugging Devin Smith’s speed into the new up-tempo offense. During his senior year in college, Smith caught for 931 yards, 12 touchdowns and averaged 28 yards per reception.

If Devin Smith can stay healthy, and he can at least threaten big plays, the Dallas Cowboys’ offense will get even more dangerous.