Wednesday, November 30th, 2022
THE LATEST
Home Cowboys The NFL Has Become a Passing League: Have the Cowboys Followed?

The NFL is a passing league. Perhaps the easiest way to confirm this rather bland statement is to follow the money.

The top 11 highest-paid players are all quarterbacks . . . and the 12th?  Pass rusher Khalil Mack.  The highest-paid running back, Todd Gurley, earns almost $6 million less than the highest-paid receiver, Michael Thomas.  Further evidence?  Our Cowboys will not pay their best player but took care of their best past rusher, making DeMarcus Lawrence a top 20 earner in 2019.  The premium has been placed on the quick release, big catches downfield, speed on the edge, and numbers in the secondary.  The NFL is a passing league . . . or is it? 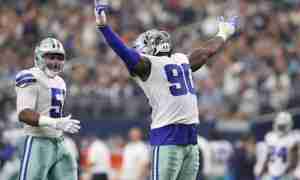 Flashback to the NFC Divisional Round last year — the Rams versus the Cowboys.  The thought at the time, at least from the Cowboys optimist, was the Cowboys would pound Zeke and shorten the game with the hope of taking a close game into the 4th quarter where you trust Dak to win the game in the last two minutes.  But what happened?  The Rams mauled the Cowboys up front and C.J. Anderson, of all people, rushed for 173 yards, and the script was flipped.

Take a look at this year’s draft. Instead of picking a safety, like most people thought they would, the Cowboys selected a huge defensive tackle to clog up the middle. Instead of taking a cornerback or a defensive end, they chose two running backs. So, what are the Cowboys doing? We all know they have always believed in a strong rushing offense,  but if that is the case, why are they hesitating to pay a top running back in the league.

There is no question that the league is more pass-oriented but the Rams proved a few things in the Divisional Round last year. 1) Run-first offenses still win games and 2) defenses need to be able to stop the run to win games.

Do the Cowboys think it is a passing league? Instead of selecting CB Jalen Ramsey, they chose RB Ezekiel Elliott. They chose not to sign the best safety in the league in Earl Thomas. They drafted a defensive tackle project over a safety.

The Cowboys want to win and the Rams proved to everyone, you need to win on the ground.