Wow, what a colorful cast of characters did we get to observe this week. Other conferences can toss jeers about our defense all they want, but they can’t say we don’t have personality.

Namely, I don’t think there’s a P5 Head Coach with as sweet of flow as Mike Gundy, but that might just be solely my opinion. Nevertheless, there are some important bits of content that I believe we can take away from the Summer, Spring and culmination of events that has led us to Big 12 Media Days.

Bob Bowlsby came right out and said it, “there are kids in the Big 12 that know how to tackle.” I think Bowlsby is tired of SEC fans coming home from getting blasted by Alabama and seeing that Big 12 teams score more than 18 points per game and assume that defense isn’t played. He’s fairly correct, and I believe this year there are some studs coming back that can play some defense. Namely, West Virginia brings back a lot of defensive production, Alex Grinch is going to toss a bucket of water on the Mike Stoops dumpster fire, and Gary Patterson will trot out his perennial top defense in the conference.

Another coach that shouldn’t be overlooked is Matt Wells. He is in a similar situation as Alex Grinch in that any positive returns will go miles for their team. The fans out in Lubbock are desperate for a defense that can pitch a shutdown inning after Bowman and Co. hit their fair share of home runs. Another coach who emphasizes defense is Matt Campbell, who has used his defense to create a name for himself after two straight 8 win seasons. Ultimately, the outsiders will look to the blue bloods to set the tone for the conference and if Texas can create some sort of pass rush to help their young secondary, we could feel the winds of change for the purely offensive reputation of the Big 12.

There are certain words that a coach uses whenever he doesn’t want to set too high of an expectation for his first season. Neal Brown used a few when he described his “young and inexperienced” team and thanked the fan base for the “patience” in the near future. That doesn’t exactly sound like a coach who’s ready to go blow the doors off of Mizzou for their second game of the season. It sounds more like someone who is bracing for impact. Across the board, there are a litany of factors that lead to a bit of a first-year slump for coaches.

Typically, the first season in charge of a new time in a Power 5 conference spells more defeat than victory. The most recent example is Matt Rhule taking over a Baylor program that was in shambles after losing 6 straight in the regular season under Jim Grobe in the wake of the Art Briles scandal. Rhule had weathered the storm of a 1-11 season before turning the team around to a 7-6 finish last year. Chris Klieman is in a bit of an uncomfortable situation as well. It’s always a tough follow-up when the coach you replace had the entire stadium named after them. The folks in Manhattan will demand nothing less than the success Klieman had at North Dakota State. As stated in the first paragraph, Matt Wells is tasked with changing the culture of a defense that hasn’t put forth much effort into stopping opposing offenses in recent history. Wells is looking to shore up a defense that hasn’t allowed less than 30 points per game in a season since 2009 while attempting to keep the ball rolling on an offense that was so prolific, it got its head coach fired in the NCAA and hired for an NFL head coaching gig. Talk about a sports anomaly.

Les Miles is to Kansas what Mack Brown is to UNC. Two excellent ball coaches for a time that got run out of town at the end of their previous tenure and took a multi-year break from coaching. Do they still have the magic touch? It might take more than a magic touch for Miles to turn around the Jayhawk football program but the name should draw in some better recruits. While I could see all of these coaches achieving success in the Big 12, coaches traditionally have a tough adjustment year for any team and I believe that will be the case this year as well. 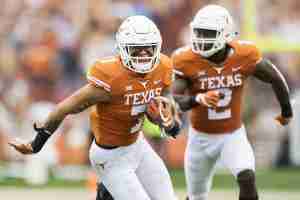 How often do you see a State Governor stoking the flames of rivalry renewal talk? Texas Governor Greg Abbott is attempting to pass a bill that would essentially force the two teams to resume their rivalry and give the people of this state what they really want. Tom Herman was right when he said that the rivalry is good for college football. The two blue blood programs in Texas deserve recruiting bragging rights, inter-conference trash talk, and a yearly resolution to these differences. Renewing a rivalry that has dated back to 1894 would certainly counter the reports that College Football numbers have been down in recent years. I attribute the decline to the same teams being in the CFP, similar to NFL numbers being down due to the Patriots perennially taking part in the Super Bowl.

Boring continuity aside, Leon O’neal Jr. sparked a bit of trash talk and debate when he took to twitter to claim the “Best NCAA safety in the state of Texas” claim from Caden Sterns. In the tweet, he references being the backup of a 6th round draft pick in the SEC as being a better claim to the throne than taking a starting spot by force and subsequently winning Big 12 Defensive Newcomer of the Year. O’neal is a little disillusioned in these claims, as he went on to say that the Big 12 is the college equivalent to 7-on-7, a drill specific to emphasizing the talent of defensive backs in pass coverage. From an argumentation standpoint, that is a bit of foot-shooting. The basis or accuracy of the argument is not the reason for my reference, especially since the tweet was not graced with a response from Sterns.

The point is, Texas A&M football players and Texas football players want to take to the field to showcase who the representative for Texas football king to eliminate any doubt (despite statistics in recent history pointing toward TCU being the top Texas squad). Texan football fans have starved long enough from the absence of this rivalry and the time has come to light the fire once more.

There never appears to be a shortage of talent when it comes to pass-catchers in the Big 12. Some of that can be attributed to the schematics of the offenses being run in the conference, but some of these cats are just physical specimen. A lot of the players I have in mind are Juniors, so they could be back for their senior years. A majority of the players listed are DFW High School football products. Coming out of Waxahachie (possibly considered DFW?) is Jalen Reagor, the TCU standout who submitted an outstanding Sophomore campaign that landed him on the All-Conference preseason team. There’s a lot of talk of him going on Day 1 of the draft if he decides to enter his name at the end of the season, but he still has a year of eligibility to play with.

In a similar situation is CeeDee Lamb at OU, with similar strengths. Another name to look out for is Tylan Wallace at OSU, who exploded last year with almost 1500 receiving yards. Another one out in Lubbock is Tech’s TJ Vasher, who is looking to step up and replace Antoine Wesley as the big-bodied, outside target for Alan Bowman this Fall. All of these guys have a year of eligibility left after the upcoming season, but two seniors who are sure to get looked at by NFL scouts are UT’s Collin Johnson and Baylor’s Denzel Mims. Each of these guys has secure hands, ability to create separation and a stat sheet that will surely make some scout’s eyes pop. It will be a fine crop of receivers coming out of the conference and could set up a conference-wide positional breakout in the 2020 season.

Lincoln Riley said that his offense doesn’t plan on having an off-year, but you know what you’re getting with Jalen Hurts. He makes safe plays and subsequentially a slower offense than last year. That means a less scoring, slower pace, and potentially some time for their defense to rest. If OU’s offense is going to be less volatile, they need to step up on defense. Alex Grinch’s ability to maximize the talent of his defense is yet to be seen. Both of these factors make me unsure about whether or not OU can make it 5 straight Big 12 titles. Also, at some point, something has to give. Texas is returning some talented and inexperienced pieces to their defense while losing their leading receiver. They had a solid showing against Georgia that toppled the end of Georgia’s glamorous season, and that is a good starting point for Herman to direct his squad.

Matt Campbell has to replace Hakeem Butler and David Montgomery, his leading receiver and leading rusher. He needs to find a way to keep Brock Purdy and their new skill position installments on the field with a solid O-line to protect them so that his defense doesn’t spend over half the game on the field. Gary Patterson has a lot of experience returning, but the issue we saw from his team last year was limiting turnovers and finding a solid QB to rally the troops behind.

This year is a much different race between 6 possible candidates, as opposed to last year’s QB race of 2. Someone has to step up down in Fort Worth to sling the rock, just like in Stillwater. Everyone is waiting to see what skill wins out in the Cowboy Quarterback race. Is it the raw talents of Spencer Sanders or the experience of Dru Brown? On the opposite side of the ball, the Cowboys need to find some sort of consistency in their pass rush to take the pressure off of their secondary.

Baylor seems primed and ready to make a push this year with a lot of clarity on who is starting where and building off of their year last year. The Bears will need to stay healthy and maintain this season if they want to make a jump like they did last year, going from one win in 2017 to seven in 2018.  Of the schools replacing head coaches, we could see some Big 12 beginner’s luck and have one of the newbies make a push in their first year.

A lot of people are saying it’s going to pan out similar to last year with UT and OU in the title game, but the crystal ball is a little too cloudy to make that assumption yet. Luckily, everyone plays the game to eliminate curiosity and give us concrete answers through victory and defeat.