With Free Agency practically complete, the Mavs attention turns to making this roster into a team during training camp and we have questions…

Barring any out-of-the-box trades, the Mavericks roster appears to be set with 14 of 15 roster spots fully occupied with guaranteed contracts heading into training camp next month. 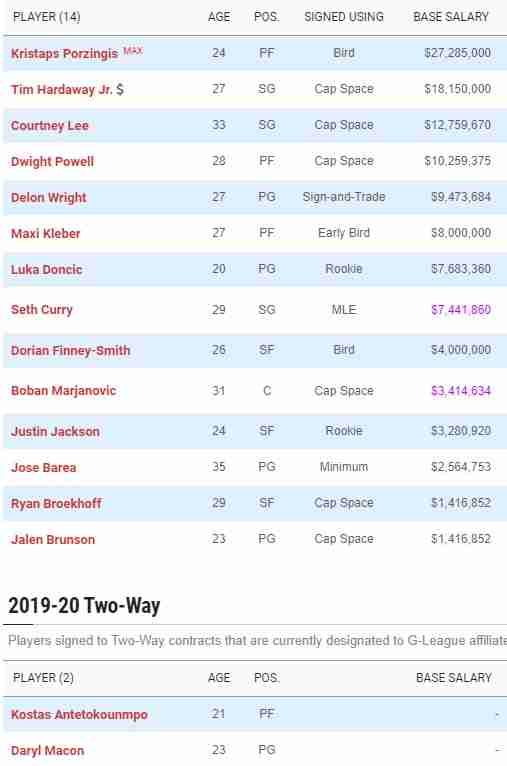 The Mavericks are bringing back a majority of players from the previous year along with a fully healthy Kristaps Porzingis and Free Agency additions of Seth Curry, Delon Wright, and Boban Marjanovic. With these players added to the team, the Mavs will clearly have some new dynamics to work through and through training camp and the preseason, it will be interesting to see how this team intends to leave behind a 33-win identity and become a playoff-bound team after 1 offseason. Here are 5 questions to keep in mind as the Mavericks head into camp.

Who Is the 5th Starter?

In an interview during summer league with Brad Townsend of the Dallas Morning News, Rick Carlisle gave a preliminary look at his starting lineup:

EXTREMELY prelimary, but Mavs’ early penciling in as starters are guards Doncic and Wright, PF Porzingis and C Powell. Most up-in-air is SF, with Jackson, Hardaway and Finney-Smith the candidates. Today, though, Rick Carlisle emphasized to me that starting lineups will be fluid.

There may not be a clear answer to this and it may be matchup based, BUT someone could emerge as the clear-cut leader of this trio. What if Justin Jackson made a great leap with his shot over the summer? What if Tim Hardaway rallies from last season and declares himself a starter in this league over the other two? What if Do-Do finds his shot again? It might not happen, but reports of out of camp may help nail down which way this team wants to play this upcoming season.

Health is the perpetual cloud over the sports world and the Mavs have plenty of health unknowns on their roster as they enter camp. Of course, KP has been cleared to play for a while, but he hasn’t played real ball in over a year and he has a longstanding history of injuries that have sidelined him. Barea is said to be ready to resume basketball activities by training camp, but how healthy is he by the season start? With his age and injury, will they bring him back extremely slowly a la Dirk this past year? Also, how is Tim Hardaway doing after his offseason microfracture surgery? There weren’t many details to begin with regarding the injury and there haven’t really been any updates. He was said to have been playing hurt all season, so what does a healthy Hardaway do for this Mavs team?

And last, but not least, Carlisle said that Luka’s primary goal this offseason was to work on his conditioning and “get in the best shape of his life”. How did that go? In his Instagram, Luka looks thinner as he hangs out on luxurious boats, but that’s not any guarantee of his conditioning work. If this team is to push for the playoffs, Luka will need to fire on all cylinders from the get-go, so hopefully, he spent some time on the bike before going boating.

What is this team’s Identity?

As stated earlier, last year’s team won 33 games, traded away 80% of its starting lineup, and limped to the finish line. In the offseason, the team made it clear that it wanted to add shooting ability (Mavs signed KP & Seth Curry, so check), defense (Mavs signed 6’5” Delon Wright, so check) and rebounding (Mavs signed Boban & Wright, so kinda check?) to make them playoff contenders. The Mavs signings were good value signings, but as argued by our own Logan Mitchell here none of these were truly elite level signings in any of these regards. The Mavs got better, but to what degree?

Who is the Leader in the Locker Room?

It’s time face the coldest of cold truths: Dirk Nowitzki will not be in the Mavs locker room for the first time in 22 years. Not only will the team miss his scoring, his trash talk, and his foil-covered plate of food, but they will miss the steady hand of his leadership. Dirk has been the prevailing “old head” of the Mavericks for most of our collective basketball lives and going into this season there will be a leadership void to fill.

It’s true that JJ Barea will be the literal old man in the locker room, but with him being the odd man out in a room full of young’ins, he may take a more subtle approach to mentorship rather than running the room. And truthfully, that’s probably the right tact. This is Luka’s team now; will he establish himself as THE leader? Will KP sculpt the locker room the way he likes as its “big fish”? How about Powell? He’s one of the most senior Mavs and he has a lot of respect in that locker room. How does the team dynamic change with all this change and who is the instigator of this change? The vibe of this team is set to be very, very different and very amorphous at first, but it isn’t necessarily a bad thing.

Who gets the 15th Roster Spot?

The last and most direct question that will ABSOLUTELY get answered by the end of training camp will be who lands that last available roster spot. There are summer league candidates like 61st pick Josh Reaves who had a solid showing or Cam Payne who also played well who might get a camp invite. And there are some familiar faces who might snag that last spot like Devin Harris or, famed Luka friend, Salah Mejri.

While the Mavs are loaded at the guard and forward spots, they might appreciate what they do off the court enough to prioritize them overtaking fliers on younger talent. That being said, Josh Reaves is a prime candidate for that last spot with the Mavs’ penchant for an undrafted project like Dorian Finney-Smith and training him up in their system. Of course, there is the very real possibility that the Mavs put more than one player on their roster and push either Kostas or Daryl Macon out of their 2 Way spot. This is not the most pressing of concerns, but it is something to look out for.

Training Camp is fun to get players in front of media again and hear updates of what they’ve been working on, but the truth is that it’s the signal to MFFLs that the season is around the corner. Hopefully, it gets the team as hyped as their fans are.