Coming into this past Oakland series, Rangers Nation saw Mazara go 0 for his last 16, but he started to make some headway during his hitting slump.

In game one versus Oakland, Mazara went 0-4 and his batting average plummeted to a .188 for the season. Game two featured an RBI double in a two-hit performance, raising his BA to a sparkling (not really) .203. This is supposed to be his year, the year where he broke out and blew past 30 homers and 100 RBI, but it just hasn’t been there so far.

Nomar Mazara is by far one of the more talented players on the Texas Ranger’s roster, but watching him struggle is making everyone wonder what is happening with the young Ranger. THEN game three of the series happened. Mazara smashed 2 opposite field home runs to left and center in Oakland for his 3rd and 4th on the season and first since April 3rd.

Over his first three seasons, Mazara accumulated 60 home runs and 242 RBI as a starting outfielder. That’s an average of 20 HR, and 80 RBI per season, and that’s solid for a starting outfielder, but with his size and ability, there’s a feeling that he should be able to push those limits and take the next step in his development. But with a batting average of just .219 thus far, he’s struggling to hit the ball on the road with a .214 avg, but even at home, he’s averaging .222 at the plate. Maybe he’s not seeing the ball, or maybe he’s trying too hard, but the fact of the matter is he’s in a slump, but we could see him working out of it before our very eyes.

For 2019, Mazara is on pace for a career-low 16 HR, 100 RBI, but his batting average is still on pace for a career low. Statistically, according to baseballreference.com, in his career, he’s a much better hitter at home with a .274 batting average compared to a .238 on the road. He’s not a threat on the base paths, as he is quite limited when he reaches, and with an OBP at just .295, he’ll need to start reaching base more. As of April 24th, he has just 6 walks…. less than AL Player of the Week Joey Gallo who has more than double at 14.

Most likely Mazara will continue his new found hot streak during this road trip into Seattle. Mazara has never been a player to fiddle in a slump for too long. Last season, he only played in 128 games, dealing with a thumb injury for a while, even playing through it at times. Before that, he played in 145 games in 2016, and in 2017 he played 148 with little to no issues, showing that he’s a consistent and solid producer.

Normally a durable player, he’s still expected to be a major piece in this team’s future, but for how long? If he can pull himself out of this slump he’s having so far, he could easily match the production from years past. And if Mazara can somehow surpass that, he could be in line for a contract extension. Let’s take a look at some comparable players and their salaries from around the MLB according to spotrac.com. Take into consideration that these are only 2019 salaries and players may be eligible for new contracts in the future. 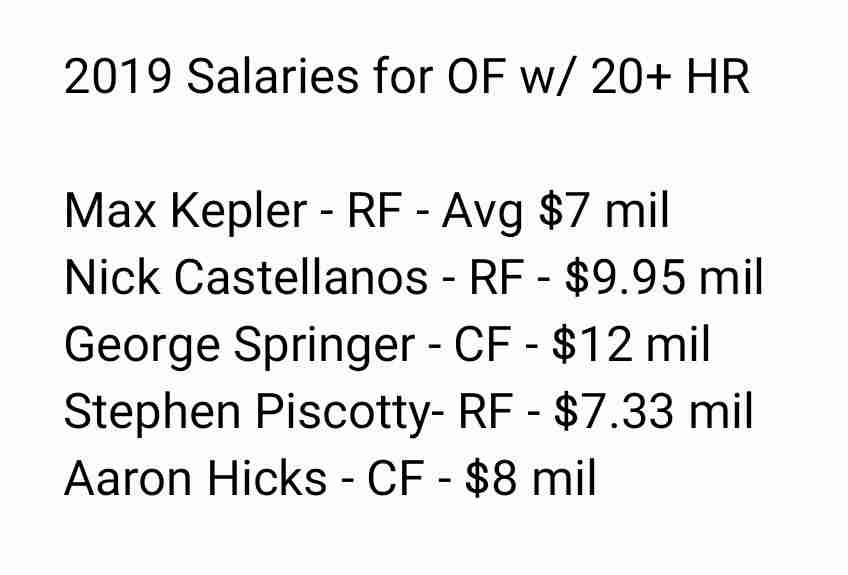 These numbers can be deceiving, so keep in mind that Aaron Hicks will have an increase in salary to $10.5 mil starting next season. George Springer will be looking at a new deal maybe before the season even ends if Houston is smart, so numbers will change. But Nomar and his agent will definitely try and compare Mazara to these players. In his career, Nomar can easily be a 25 HR/100 RBI player year in and year out, and that would put him in the mid-tier level of the MLB outfield. But only reaching that point would benefit him in negotiations for a new contract. If he stays where he’s at now production-wise, which is a 20/80 player, the Rangers could be looking at a player in the $9-15 million range in the market that players are being signed.

Needless to say, Nomar Mazara is not living up to expectations this season, but do not fret Rangers Nation, because the real Nomar will be arriving soon.