The Rangers had an abbreviated series versus the Oakland Athletics due to terrible weather in the Metroplex on Saturday but were graced with beautiful baseball weather to finish the weekend.

With beautiful weather came an intense barn burner of a game, having highs and lows throughout the series finale.

Adrian Sampson held his own in his first career start until the 4th inning that is. Sampson’s ultimate downfall was his inability to miss bats, getting shelled for 8 hits and 7 earned runs in just 4 innings of work. The A’s got off to a solid start in the series finale but blew the gates open by scoring four runs in the 4th, with Jurickson Profar starting a two-out rally with a walk, followed up with 4 straight hits and 4 runners scoring in a row.

Before his start, Sampson had held a 1.86 ERA out of the bullpen in just 9.2 innings pitched. His first 3 innings were not bad despite his final stat line. He did give up 2 home runs to Matt Chapman and Stephen Piscotty, however, which were his second and third given up so far this season, respectively. Here was his final stat line on the afternoon:

Not good. But this is the situation of the Ranger's pitching.

Elvis Andrus hit his 3rd home run on the season, but only after he hit his 45th career triple, passing Ruben Sierra on the all-time franchise list for 2nd place, with Sierra having 44 himself. Andrus now only trails Michael Young in that category, with Young having 55 in his Ranger career. Elvis also stole home for the fifth time in his career, setting a franchise record, and becoming the 32nd time in franchise history for a player to steal home. Delino DeShields added two more stolen bases in the contest which were his fourth and fifth on the season thus far, giving him 87 stolen bases in his career according to baseballreference.com.

.@ElvisandrusSS1 swipes home for the 5th time in his career.

He has the most steals of home among active players. pic.twitter.com/gmrpTJDnE6

The 8th inning started out with a walk by Nomar Mazara, followed by a fielder’s choice from Logan Forsythe. Shin Soo-Choo also walked, and Asdrubal Cabrera continued the rally with an RBI single, but possibly the most noticeable move was pinch-hitting Danny Santana for Patrick Wisdom. Santana didn’t disappoint, as he ripped a 2 RBI triple in his first major league plate appearance and tying the game up at 7 runs.

Delino DeShields came up after Jeff Mathis flew out to 3rd base, and perfectly executed a squeeze bunt, a strategy that involves a runner on third base to steal home while the batter drops a bunt in order to “squeeze” in a run. Santana’s run put the Rangers ahead 8-7 and the rest was on Jose Leclerc to come in to earn the save. He only faced four batters and struck out the side with a single sandwiched in the middle.

Leclerc after the game said, “I just try do [what] I’m supposed to be doing, and today everything was good,” when asked about whether or not he feels pressure in that kind of situation. 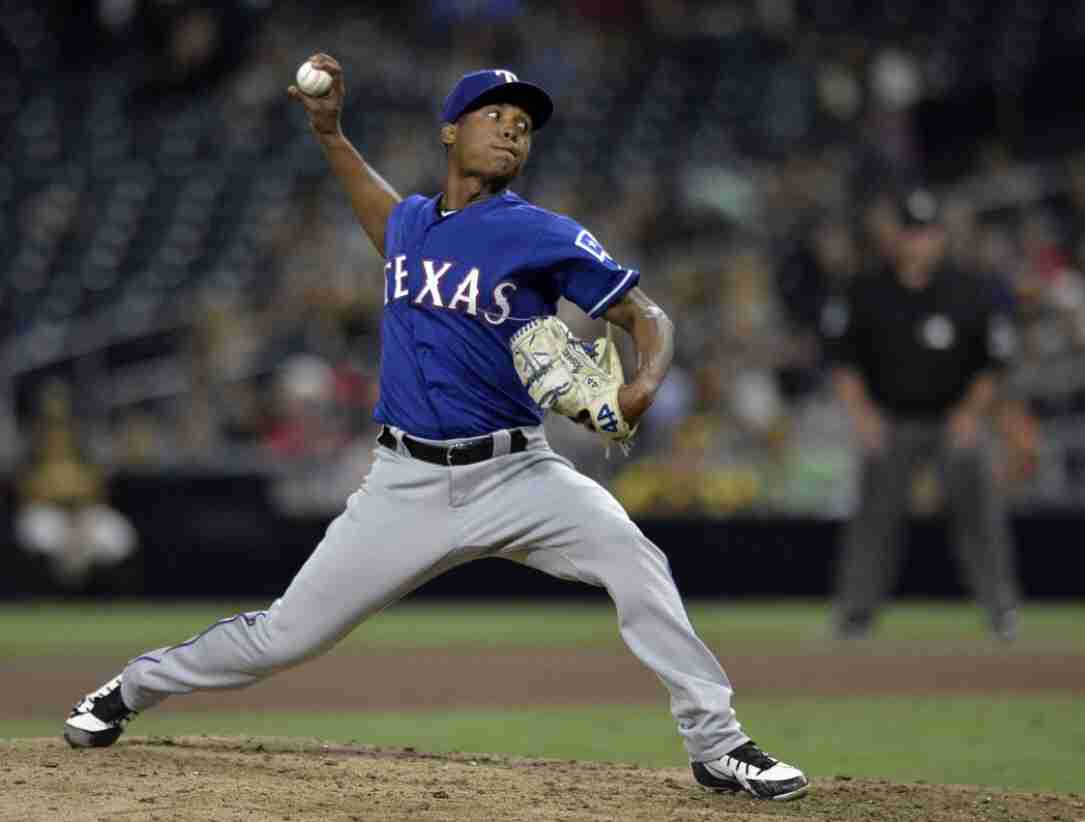 The Rangers take on the Los Angeles Angels of Anaheim in the next series at home. Let’s preview the starting pitchers for both teams, including the pending return of Mike Trout. Trout was diagnosed with a strained right groin that he had injured against the Brewers, missing just 4 games so far. He is still considered day-to-day but will more than likely be available for the Angels if he is able to play without pain. Trout signed a $430 million deal with the team that spans over the next 12 seasons, but let’s take a look at the next few matchups between the teams.

Miller has been bad so far this season, with only 5.2 innings pitched between 2 starts, you read that right. He has yet to reach 6 innings pitched between two starts and has faced 37 batters in that span. With a WHIP at 3.176 and ERA over 9.00, the Angels are poised to come into Arlington and light him up. It’ll be up to the bullpen to save the day once again, but with Chavez, Gomez, Springs, and Leclerc having pitched on Sunday, it remains to be seen to who will be available in relief.

Matt Harvey signed with LA to attempt to resurrect his career that took a wrong turn in New York and he quickly turned into a bust from what was once a very promising career. He’s holding a 10.05 ERA through three starts so far and only has 11 strikeouts in 14 innings between those starts. The Ranger’s lineup will see more left-handed hitters to maximize the effectiveness versus Harvey.

Last time Felix Pena faced the Rangers, he went 4.2 innings with 7 Ks, 2 walks, and gave up his only run by the way of a Joey Gallo bomb. He blanked the Brewers in his last start through 4 innings, but he received a no-decision despite the strong start. He’s averaging 4 innings per start, so the key is to jump ahead early and apply pressure on the starter.

Mike Minor is the Ranger’s best pitcher in the rotation. He had a rough opening day but has gathered himself and put together back to back quality starts by going 14 innings combined, allowing 2 earned runs and striking out 12. He did give up two home runs against the D-Backs, but those were the only runs given up in that span. Expect more of the same from Minor, as he looks for his 2nd win on the young season.

Last time Lynn faced LA, he was given the loss by way of Felix Pena in a low scoring game 3-1. But over his last two starts, he has pitched 6 and 7 innings, giving up 3 earned runs total, and racking up 14 Ks in those 13 innings. He’s holding a 9.2 K per 9 innings so far with a 4.82 ERA. If Texas’ bats show up and Lynn continues his pace, the Rangers have a real shot at winning the series.

Tyler Skaggs is an inconsistent pitcher, for the most part, having starting three games, but only pitching a season-long of 6.1. He was rocked for 4 runs and was pulled after just 4 innings against the Cubs in his last start, but expect a much better Skaggs this time around. His season-long start was against Texas, where he had five strikeouts and only gave up one run.