“LUKA! LUKA! Daddy look! LUKA! LUKA!” Nah son, that’s Dirk. Without missing a beat my son continued his enthusiastic chant on a not so ordinary Tuesday night. It was Dirk’s last home game.

Time flies when you’re having fun. That small exchange with my four year old helped me put Dirk’s career into perspective. As a brash adolescent, I still remember walking into Reunion Arena for the first time. My dad, thirty year Texas High School basketball coach, pointed out Derek Harper and my favorite old school Maverick Rolando Blackmon on the team’s photo. It was a huge poster right outside the arena floor. Dad leaned over and said, “Those guys play the game the right way.” I was confused. The right way? As a basketball purest he enjoyed the nuisance of their games however as a youngster I naturally never gave them their just due.  Exactly like my four-year-old Tuesday night. 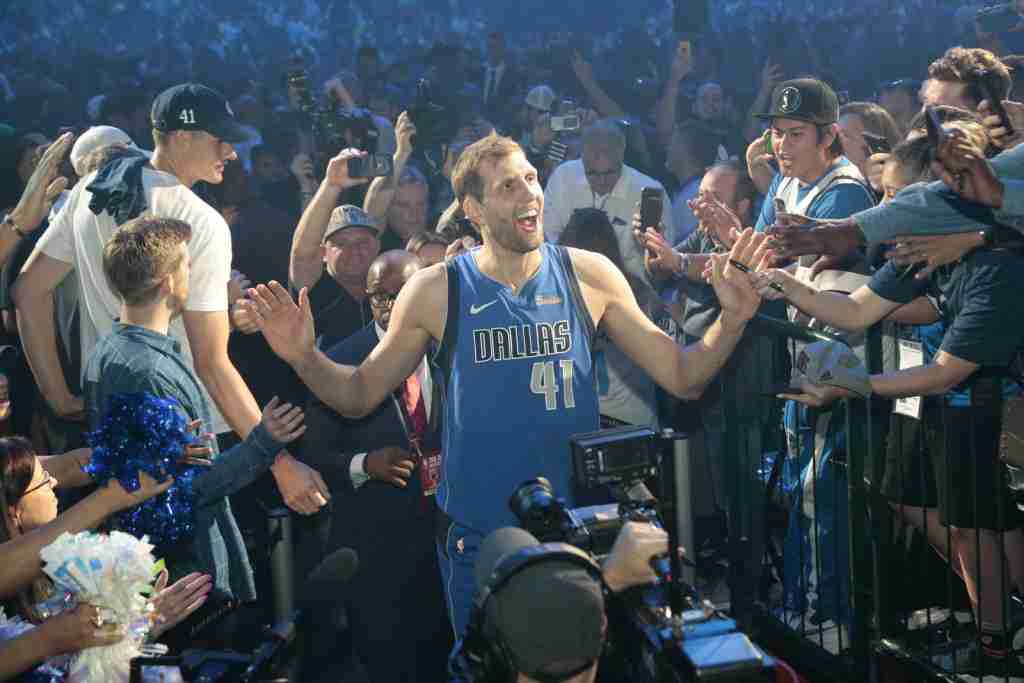 It was my first corporate job since college. It was my third year with the company. Previously I dabbled in many professions shifting from education, coaching, and even custodial work. I guess you could say I was searching for my niche’. In 2011 the company took an innovative turn creating an interoffice social media platform where we could share common interest respectfully. Without hesitation, I began a Dallas Mavericks group. The way Dirk took control of those 2011 finals is forever sketched in my memory. The championship run finally validated my continued support and Dirk’s storied career. When the cooler talk began mine always started with Dirk and the Mavericks. It helped continue my love of the game as my personal skills and age went in opposite directions. Dirk always played the game the right way. Just like Derek Harper and Rolando Blackmon. My father planted a seed within me as a youngster. Something I wasn’t able to fully understand until @Swish41 and the Mavs did the impossible. They brought the trophy home!

Watching Dirk dominate helped me adapt to a new chapter in my life. It gave me something to look forward to. The team has always been successful. They consistently win over 50 games a season so cheering for the club isn’t hard. Prior to winning the teams lone ring deep disappointing playoff runs were the norm. The team seemed to always be in the thick of the race only to see it fall apart late. The brash adolescent was now a maturing adult still unsure of his direction and place in the world. Dirk seemed to mirror this same path. Although unsure and unproven his direction was forward. Working hard, giving it your all and pushing through with strength, class, and dignity is the way. The 30k points scored, the MVP’s, the last second buzzer beaters are minuscule in comparison to the life example he’s portrayed. These are all transferable traits we need in our own lives which just gives his career even more credence.

Tonight versus the Spurs everyone gets one last chance to cheer on the big German. Which seems fitting considering the history of the two clubs. Watching the farewell ceremony last night was tough but necessary for closure. The emotions were raw and real because the love and support are for one of the most authentic and humble members of the NBA family.

Dirk leaves the game having completed his 21st season all with the same team. He’s accumulated 199 total teammates along the way. Both feats are NBA records. He’s scored more points than Wilt Chamberlain and is by far the franchise’s best player but those accolades pale in comparison to the gifts he gave MFFL’s and NBA fans alike.

The game is in a better place because of Dirk’s work ethic and unorthodox journey to the league. The inspiration shared around the world is universal and I join the entire NBA community in saying…