Tuesday, November 29th, 2022
THE LATEST
Home Mavericks Reassurance: Explaining What Should Be Understood

The rookie of the year race has been a foregone conclusion for some, but it could be a  premature assumption. A late resurgence by Trae Young could change the conversation. There are few factors more significant than longevity and consistency when debating a potential award winner.

With just a few games left is it too late for the debate? YES! No matter the performance there just isn’t enough season left for the Hawks guard to catch eventual Rookie Of The Year Luka Doncic.

In a previous piece “Is Wonder Boy Really This Wonderful” I examined the probability of Luka bringing home the hardware based on other comparable rookie seasons both historical and current statistics considered. He has yet to disappoint as only a hand full of games remain and his averages are still among the league’s elite. Below is an updated all-time list of NBA rookies who have averaged at least 19 points, 6 rebounds, and 4 assists.

Absent the joy of watching any game live statistics generally tell the game’s story. Fans and pundits alike depend on these numbers to justify or diminish most times predetermined points of emphasis. Stats should be used as a tool to determine a point not to accompany it like fries to a burger. In an effort to remain objective Trae Young has played his way into this discussion. In March alone he put together a streak of eight straight games of 20 plus points. Sprinkle in a few game-winning buzzer beaters and tada!!! There’s your legitimate rookie debate. Young’s dreadful start combined with the ridiculousness of Donic’s early achievements gave many a premature reason to put this debate to bed. However, as the Hawks rookie improved his production the inevitability of Luka winning quickly faded. Some, namely last years ROY runner up Donovan Mitchell have crowned Trae Young rookie of the year already.

Examining Trae Young’s resurgence is without doubt justified. He has turned a season that began with whispers of “bust” into a possible award-winning campaign. In his first full month (Oct 18′) of NBA action Young only averaged 14 points, 8 assist, and 3 rebounds. Solid numbers for most rookies point guards but underwhelming considering his draft position. At the center of Trae’s return to the debate is a pattern of continued positive progression. Driving home this point is these same stats but in March. Where he’s averaged 23 points, 9 assist and 5 rebounds. Also, keep in mind among rookie usage rate Donic (29.5%) and Young (27.4%) are separated by the slimmest of margins. They rank first and second among rookies who’ve played over 50 games. The two franchise cornerstones are already significant pieces to their team’s on-court success and productivity. There’s no question Young’s bounce-back game is on point, but to win this award an entire season of consistent production is required.

Generally speaking, expecting consistency from a rookie is unrealistic. For most, the grind of 82 games is enough to humble high expectations. More importantly, where a player is drafted determines the level of patience prescribed by fans and the team alike. Teams and fans are less likely to advocate low production from a low draft pick. 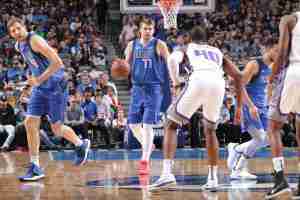 Conversely, the higher the draft pick the more patience shown. The background of Luka Doncic seemingly made immediate NBA success a probable proposition. The rigors of a professional lifestyle were familiar experiences as he entered the league with 3 years of the pro ball already logged. Unlike his counterpart, Doncic has remained consistent throughout his rookie campaign. As previously outlined his current stat line puts him among NBA legends but the rare company doesn’t end there. Currently, there are only ten PLAYERS IN THE NBA who are averaging at least 19 points, 6 rebounds, and 4 assists.

It’s only one rookie in this elite group. The remaining players are superior NBA veterans with multiple years of experience. The young Slovenian native has remained solid in his production which is ultimately why the trophy should be his. Voters must consider the entire season for such a prestigious award instead of the Janet Jackson classic “What Have You Done For Me Lately” mentality. Although the loses continue to mount for the Mavericks the continued productivity of Doncic hasn’t gone unnoticed.  Colleagues have given him the nod including last years winner Ben Simmons.

.@BenSimmons25 says @luka7doncic is the rookie of the year. @PompeyOnSixers with the follow up question of why watch the full clip below! #Lukadoncic #BenSimmons #MFFL pic.twitter.com/lRAixKdXJe

There is rarely a dull moment in the NBA Twitter-verse so watching the debate evolve has been eye-opening. So many premature predictions are being coated in tailored stats to outline each players importance and worthiness. Making matters even more complicated is the close proximity of the Atlanta Hawks record. Only three games separate the clubs prior to tonight’s action.  It would seem the Mavs highly regarded the first-round pick will have acquiesced to Atlanta as outlined in Dallas Sports Nation’s piece “Top 5 Pick: Reality or Myth”. With that as a backdrop understanding, Luka’s importance to the team’s success is clear. The young star is a winner and it’s being acknowledged by the club who have accelerated a rebuild due to the rooks outstanding play. Injuries, fatigue and a futile season have aided in the recent absences of the 4x Rookie of the month. This only confirms the Mavs jewel is human and ending this season on a healthy positive trajectory is paramount.

There is no downplaying the significance of sharing stats with legends of the game. Over analysis of advanced stats can sometimes serve as a detriment to clear cut facts. As the season progressed Trae Young did, in fact, improve however the overall production of LD overshadows his progress. At this point of the NBA season, there have been eight rookie triple doubles, seven of which belong to Doncic while Young owns one. This alone reflects the overall ability of a player that is unable to legally buy beer in the U.S. The obscure advanced stats used to justify Trae Young winning this award are cherry-picked and won’t address the longevity and consistency shown by Doncic.

As the season closes the value of a players complete season versus the rapid improvement of an inaccurate scouting hunch will take center stage. Regardless of the showdown, the ones that have paid attention for the entire season know Luka Doncic deserves this award.