Its been an awkward yet exciting season for the Mavericks who are clearly out of playoff contention.  The team continues to lose at a formidable pace which brings forth one huge question. Just how close are they to keeping this year’s first-round draft pick?

As a fan trying to make sense of this draft scenario can be difficult, but if the Mavericks finish with a bottom five record or are successful getting there with the lottery they keep this year’s pick and would convey their 2020 first-round pick to the Hawks, regardless of draft position. If they do not reach either milestone the Mavericks will not have a first-round selection this year.

According to Tankathon.com the record difference is tight and coated in unpredictability.

The Mavs have eight games remaining while the Hawks have seven. So the margin for error is extremely small if they plan to retain the pick. The good news is Trae Young has finally found his stride as a rookie in addition to the Hawks winning 3 of their last 5 games. The Hawks must continue their winning ways while the Mavericks continue to lose to execute the strategy in full. 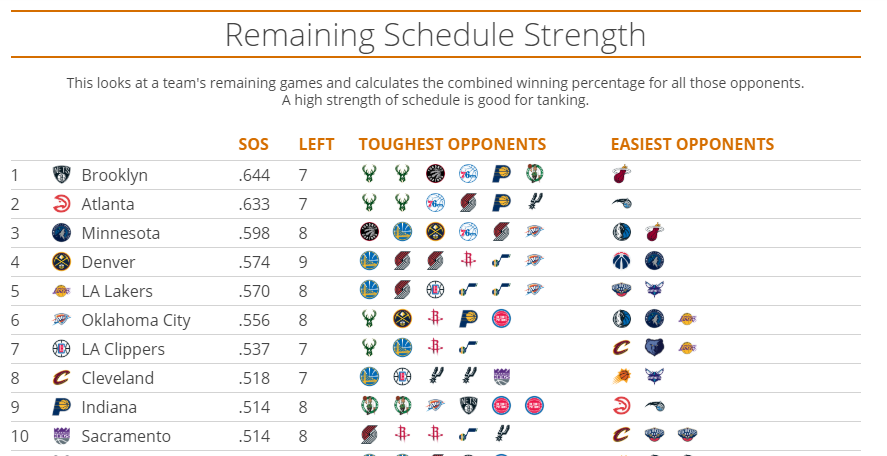 With only a few games remaining the Atlanta Hawks (27-48) own the second toughest schedule. A ten point win last night versus the Pelicans is welcomed news as the race to fifth worst heats up between these clubs. Forecasting their future results is even more arduous when considering the circumstances. In their last ten games, the Hawks have/will face eight playoff teams. They clearly have the potential to lose more games as their schedule strength is markedly tougher than the Mavs. The only club in the league with a tougher remaining schedule is the Brooklyn Nets. Absent injury or the often used “player rest” the Hawks won’t be favored in any of their closing games boosting the possibility of keeping the prized pick.

In the clubs final seven games they will face the Bucks twice, 76ers, Spurs and Pacers all once. These are contending squads with a combined winning percentage of 64%. Since the Mavericks are in a dependent predicament these are unpleasant figures to a hopeful squad in search of young game changers. As the season dwindles to a close rooting for the Hawks isn’t just considerate but also a productive gesture.

After a competitive loss, last night against the Sacramento Kings the Mavericks (29-45) find themselves in a legitimately compromising position. They own the 23rd toughest remaining schedule with its most difficult matches against the Sixers, OKC, and the Spurs. Although these are clear cut playoff squads they only make up 3 of the remaining 8 games.

The other five games consist of teams either ranked at the bottom of their respective conferences or fighting for a low playoff seed. This tidbit coupled with a tough remaining schedule for the Hawks suggests keeping this pick is a long shot. To effectively attain the warranted pick the team must at the minimum finish the season .500 or worse while the Hawks complete the season undefeated or 6-1. Not to mention both Memphis and Washington are one game behind the fiasco. In a moment of clarity, the Mavs front office has to acknowledge the advantages of losing the remaining scheduled games. It’s only logical.

The Mavericks once hopeful strategy could quickly morph into an afterthought if the season is completed as anticipated. Essentially eliminating any chance at a top draft pick. So instead of focusing on the draft, the team could streamline their efforts to pursue another game changer in free agency. Obtaining a significant contributor in the offseason is key to a Maverick resurgence. The current structure of the club makes scouting and asset acquisition essential priorities moving forward. This has been a Mavs forte as of late. Jalen Brunson, Luka Doncic, and Kristaps Porzingis are prime examples of excellent scouting and timely player acquisition.

The Mavs have used similar paths in the past to build winning teams so having confidence in their ability to adapt and replicate should be high. The quickly approaching off-season is sure to be one to remember!