Dominique Badji signed with the club on July 23rd, 2018, in a trade with Colorado Rapids. A signing made last year, Badji was supposed to fix the goalscoring hole left open by an out-of-form Maxi Urruti and Cristian Colman. However, his goalscoring record last year for FC Dallas was subpar, and most fans were left another year wondering when the club was going to sign a Star Striker. After his first preseason, Badji has the opportunity to prove his worth.

The game against Bayern Munich during preseason demonstrated to the fans why he deserves a second opportunity. Constantly throughout the game, he was dominant in speed and in strength, and that quality of play allowed him to get a goal and an assist in less than 20 minutes. Most importantly for him, though, is the fact that he played miles better than new signing Zdenek Odrasek. Mind you, this was the beginning of preseason, but his performances in all of preseason, including against MLS opponents in Tuscon was enough to have him starting for the first three weeks

Now is time for us to grade him.

One of the major complaints by many Colorado Rapids fans is his inability to be consistent in front of the goal, which is the mantra with forwards for FC Dallas over the past couple of seasons. Oscar, however, saw that Badji had the potential to become a star striker in this league, due to his athleticism and skill.

The main problem with Dominique Badji last year was Maxi Urruti. Badji is a player that scores either by getting at the end of a cross or by making runs to receive through balls. Without a true number 10, the team was unable to find Badji in those gaps between the defense.

That is the main issue with Badji: he is useless without service, and it was quite visible against Columbus last Saturday.

Columbus played in two defensive blocks on Saturday, one of the backline, and one that included the defensive mids and the wingers. Due to their defensive ability, we saw a reoccurrence of what occurred against New England: Acosta and Gruezo were not able to make a single penetrating pass forward. 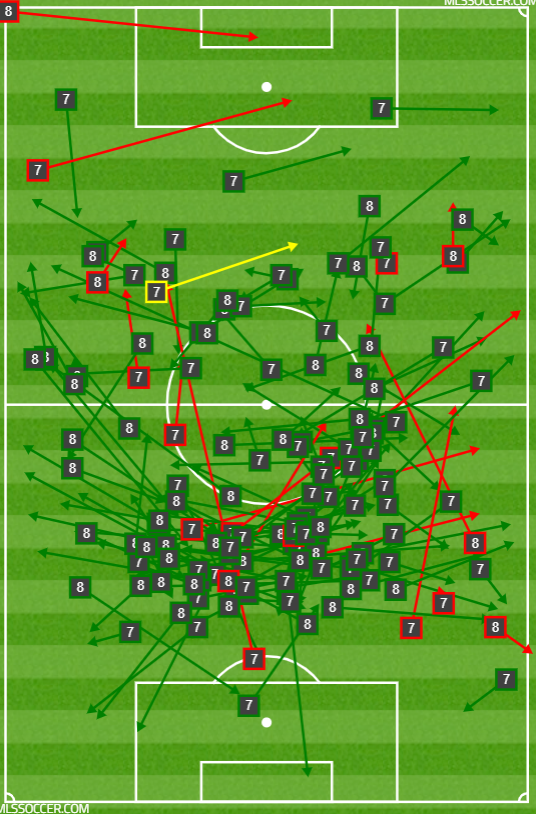 Now, in theory, this is fine. Gruezo and Acosta aren’t the “playmaker” of this team. Rather, that job is Paxton’s (it’s worth mentioning Mosquera does play a contribution in developing the play as well).

But in this game, Paxton was not able to do that as much as he was able to against LA. He wasn’t able to really develop play due to that block Columbus played.

Now, this could also possibly be ignored. Badji isn’t really the Barrios type, as shown by the fact that Pomykal’s best through ball was the best opportunity the team had (he put Barrios one-on-one against Zach Steffen). Badji’s main goalscoring threat is based around tap-ins and headers, kind of like his counterpart in this game Gyasi Zardes.

Well, the wingers and wingbacks didn’t really give him much to work with. 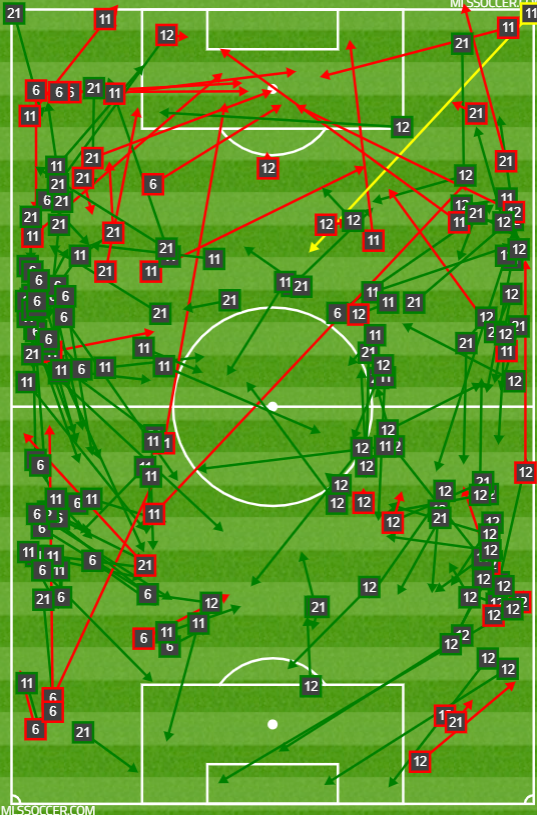 Badji isn’t blame-free in this game. In a tough day like Saturday, he has to be able to come in clutch in moments when he takes a defender on a dribble or when he does one-twos with another player, both which he did terribly.

But it won’t be solved by putting in Odrasek. The Cobra is the exact same type of player: he is a player that wins headers and scores tap-ins.

It also won’t be fixed by putting in Jesus. He is a completely different type of striker, one that roams around the defenders, trying to make space for through balls so he can take on defenders. Although that could have been useful on the day against Columbus, that isn’t a player that fits in a possession-driven system.

We know Badji’s strengths, and we know what we get out of him. There is no point in fiddling with the idea that he has to be more skilled with the ball at his feet, as he can’t really change the type of player he is. What the club needs to do is fix the service coming in from the wingers, who have also been relatively poor at the beginning of the year.

The season is still young. There is still time to perfect the system. But until then, it’s a bit premature to drop Badji from the starting lineup. The team is still jelling, and I honestly think that Badji is our best option up top. Let the system get fixed first.

Three takeaways from the FC Dallas vs Barcelona SC scrimmage

FC Dallas faced their first foreign test of the preseason on Wednesday, falling 1-0 to Ecu…