Tuesday, November 29th, 2022
THE LATEST
Home Mavericks The Ugly Truth: One Too Many

Somebody needs to say it.  Its not popular or trendy but its reality. The unpopular fact that Dirk Nowitzki should have retired last season is staring the Mavericks and the NBA community in the face. The once crown jewel of Dallas is now a shell of himself and its time we all say good bye for basketballs sake.

For most it was a foregone conclusion that this would be the last season we witnessed the current curator of the “one legged fade away”. Dirk has provided countless unforgettable opportunities to praise his future Hall of Fame career but we’ve all fallen victim to nostalgia. Dirk has always been at the lower end of the spectrum when ranking NBA superstars. It always seemed he was overshadowed by more athletic and dynamic players like Kobe, T-Mac, Shaq, and Lebron to name a few. 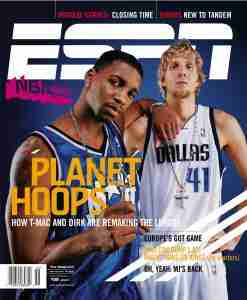 Besides the previously mentioned “one legged fade away” Dirk’s most well known trait is a superior work ethic. The hours spent perfecting his craft are well documented by players and media members alike .

Currently in his yet to be confirmed final season Nowitzki is averaging 13.1 minutes per game and has started in five of those games. In the last six games, however, he has played no less than 18 minutes. The Mavericks are a measly 1-5 in these contests. Suggesting Nowitzki is calling it quits too late is predicated on his dismal return this season. I would prefer he complete this season as a defacto farewell tour with the cheers and adulation he most definitely deserves. Universal admiration and respect for a single player is rarely shared throughout the NBA so his potential struggle to leave the game is most definitely understandable however all good things must come to an end.

Its no coincidence Nowitzki’s spike in minutes coincides with the initiation of a tanking plan outlined by Dallas Sports Nation writer Chris Frasier (@frasierfilms) in his piece “Why The Mavs Should Tank”. Chris made clear that continued losing would create an opportunity for the Mavs to keep their top five protected draft pick otherwise due to the Hawks. This was for the acquisition of Luka Doncic. The prospect of another lottery pick may be too enticing for the club to pass up if the alternative is a futile playoff race bound to end in the first round.

Its hard to believe when Dirk graced the cover of ESPN Magazine with Tracy McGrady 18 years ago he was considered a rising star with unlimited offensive ability but defensive inefficiencies that would prevent him from ever attaining true greatness.He flipped this narrative upside down by winning MVP in 2006-2007, a championship in 2011, and becoming arguably the greatest non-American born basketball player in the games history. Keeping up with his unorthodox profile Dirk has yet to acknowledge the status of his future with the Mavericks advising its all about “how the body feels”.

Dirk hasn’t said if this is his last season. But judging by fan reaction, fans are treating it as such. Dirk on the fan celebrations: “If I come back, we’ll do it all over again. I always said we’ll see how the rest of the season plays out and how the body feels.” @dallasmavs

The unmatched loyalty of the big German shouldn’t be taken for granted however watching him play this season has been tough on the eyes. The once potent scorer is now a certain role player with limited offensive bandwidth. The Mavericks are satisfying an organizational goal of potentially maintaining a draft pick while using the entire season to honor the teams greatest player. This is the reality of the situation. Over the last six games Nowitzki’s minutes have progressively increased as displayed below by NBA.COM.

As his minutes increased the offensive production waned and lets not mention the increased defensive liability created by his expanded minutes. The season began with Dirk averaging only 13.1 minutes per game but now the 40 year old 20 year veteran is averaging 22 minutes in the last six games.  This is extremely abnormal when  you consider the concentrated effort made at the trade deadline to make the team younger and more athletic. The clues suggesting “tanking” is a actuality are palpable and should be acknowledged especially when they are conducive to a potentially brighter future.

The professionalism and character of Dirk Nowitzki can never be questioned. He is by far the greatest player to ever grace a Maverick uniform but that doesn’t exclude him from the scrutiny associated with continued losing. Having previously won a championship for the club only skews expectations to a more unrealistic state. Such expectations should be excluded from a 40 year old veteran clearly on his way out the league.

Dirk’s likability has made it difficult to criticize his current lack of production. There was a time when opposing teams and fans feared the 14 time All-Star. His possession of the ball inevitably created a universal uneasiness felt by opposing teams and fans. Now those same bystanders feel the need to cheer the minuscule accomplishments of  the all time great. Each pass Nowitzki receives whether at home or on the road is met with a undeniable caged jubilation that can only be unleashed with a made Nowitzki basket. Each three point attempt is followed by a collective gasp as everyone hopes to see the former MVP drain one of his customary buckets. This form of respectable sympathy isn’t warranted by the humble Nowitzki and is more than likely embarrassingly shunned. There is a thin line between the appreciation for ones work while simultaneously being sympathetic to the understandable lack of expected production.

And that’s a good thing…. http://t.co/ELCckiwNLT

Superstars rarely display attributes that show vulnerability that can be deemed as relatable to fans. If you follow Dirk on twitter you know this is part of his personality. He’s never had a problem poking fun at himself. The most endearing aspect of Dirk Nowitzki’s character is without question his propensity to be “one of the guys”. He seriously makes you feel as though he is just as goofy and unsure about his life as you are about yours. This is why criticism of the big man is few and far between.

Too many times star athletes display distorted values of themselves that in turn negatively impact how they are perceived. Nowitzki has skirted this familiar plot and is widely regarded as one of the more approachable and humble personalities in the league today.

The former finals MVP should have hung his sneakers up last year but who are we to suggest when his love affair with the game is over? His career accomplishments coupled with a relatability the NBA has never seen gives credence to the limited reproval he has and will receive regarding hopefully his last season with the Dallas Mavericks.