Of the many comparisons between the 21 year vet Dirk Nowitzki and the new rookie sensation Luka Doncic, one is seldom acknowledged: they are both good for a laugh.

Over the course of All Star Weekend, fans got to watch the best players in the NBA do their thing on a national stage. For some, that was dunking over Shaq or hitting a half court shot. For others, it was catching an impossible bounce lob or chucking up all the 3s. However, Mavs fans had more singular focuses: how Luka would fair and please let Dirk’s last All Star be glorious. Luka had fun, Dirk had a solid 3PT Contest showing and dazzled in his 4 min of the All Star Game going 3-3 from deep! Good times. 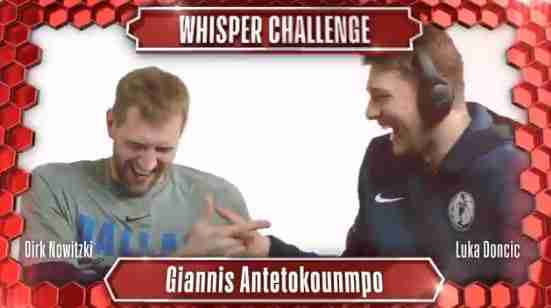 The always unexpected bonus of All Star Weekend is the stuff in between the action. Getting to see which players are actually friends. Hearing stories about how one star looked up to guys he’s playing with. Hearing the best in the world dig at each other and laugh at themselves. Mavs fans should definitely be proud of how their two All-Star participants handled themselves on that front.

Dirk is the perennial jokester, as we have 21 years of videos where Dirk has been willing to do whatever for a laugh. He’s been Santa, Ron Burgundy, Donald Trump, Thor and a fox all within the last few years. Well as he looks to hand off the reigns of the franchise to the heir apparent in Luka Doncic, he’s also handing off the title of Maverick comedian in chief. Dirk and Luka owned All Star Weekend in terms of comedy and just illustrates how the two share a self-effacing humor that will help Mavs fans transition from the GOAT to The Future.

Neither Dirk nor Luka expected to make waves over the weekend as Luka wasn’t named an actual All Star and Dirk was an honorary appointment. Both went to have fun and boy, did they. Luka grinned every second of the Rising Stars Game and Dirk was just pleased to get through all the racks of the 3 point contest. Thankfully, the NBA decided to mic both of our stars up for their respective game and you can listen to how both of them talk CONSTANTLY and completely in good fun.

Dirk is such a bro pic.twitter.com/sniLKOGgzP

WIRED ?: Listen in as Luka Doncic was mic’d up for the #NBAAllStar #MTNDEWICERisingStars game pic.twitter.com/KwKLpbEKpT

The two Maverick All Stars were regular jokesters away from the hardwood as well. Before the Rising Stars Game in which Luka played and Dirk coached for the International team, Dirk made sure to dig at Luka ever so slightly in his pregame speech and Luka takes it completely in stride.

Then the NBA gave the fans this hilarious glimpse into our comedic duo. The sheer fact that both of these men were game to play and do it for fans that don’t really know them yet speaks volumes as to their mentality. Both are up for a game and both don’t care if they don’t ALWAYS look like the coolest kid in the room. It also doesn’t hurt that both guys have strong accents putting the other at a pretty strong disadvantage.

Yet another example of how enjoyable this pairing is pits Dirk, who is old enough to be Luka’s father, up against him rocking 90s R&B classics. Luka doesn’t stand a chance and Dirk gets his throwback jam on. Its quality entertainment we’ve come to expect and the NBA recognized the potential in these two to brighten up the room.

Dirk and Luka are the father and son duo we all need. #MFFL pic.twitter.com/hHWfmMGHbJ

All Star Weekend may have taken place in Charlotte this year, but it is ALWAYS half hosted online. NBA Twitter is just as fascinating as the sport and probably more cutthroat than GMs ready to trade entire teams for single players. Still, Dirk and Luka can laugh off anything. In a social media environment that takes no prisoners, these two basically know that the best way to handle Twitter is by poking fun at yourself. 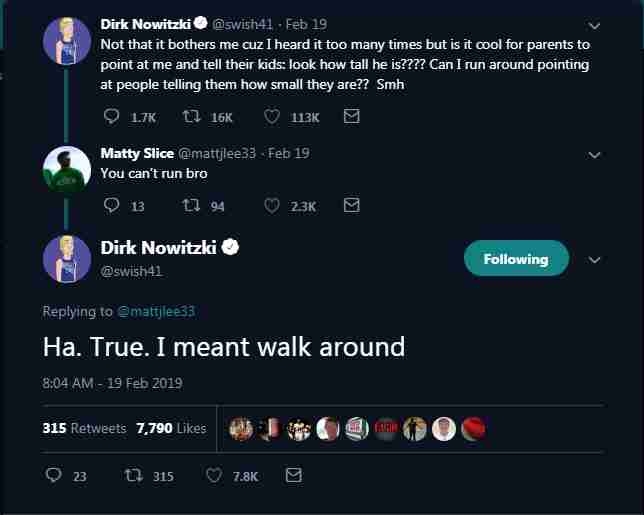 And of course they go at each other too. Once Dirk was announced as his honorary coach for Team World, Luka chirped at Dirk and Dirk gave it right back to him.

An underrated part of what has made Dirk the Greatest Dallas athlete of ALL TIME (yeah I said it, @ me) is that he knows that this entire game boils down to entertainment. Give the fans something to love on the court and someone they can love off the court and you can be enshrined the way Dirk will be in Dallas forever. Most players have to learn how to take ownership of a franchise, but Luka is proving over and over again that we don’t need to worry about him. He’s handling his business on the court and off the court, he’s winning all the hearts and minds he comes across.

No one needs to worry about the Mavs losing their sense of humor once their King Goofball retires, the crown price has you covered.