Coming into the season it was clear Luka Doncic was the leagues most mysterious rookie. His game was over analyzed to a sickening degree because, for the most part, no one knew what to expect. There literally has never been a rookie his age that possess a professional resume like his. 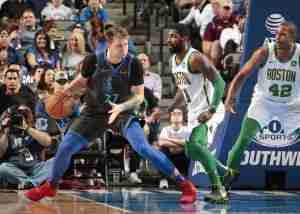 The surplus of  Euroleague accolades did little to halt the criticism as many weren’t buying a 19-year-old, overseas star, as an NBA franchise’s figurehead. Luka has wasted little time addressing the criticism as the team continues to show unique potential while winning games.

The Mavericks are surging! They have won six of their last seven games. The brief streak includes wins over OKC, Utah, Golden State and most recently the Celtics, all quality teams.  The Mavs have seemingly found a rotational groove that is working. The progress at which the team is improving is steady while still showing there is work to be done. Tonight the squad is scheduled to take on a struggling Rockets team who have lost three straight and are in search of a team identity. Once again an opportunity to eclipse the .500 mark against a probable playoff team presents itself. The Mavericks should win this game! 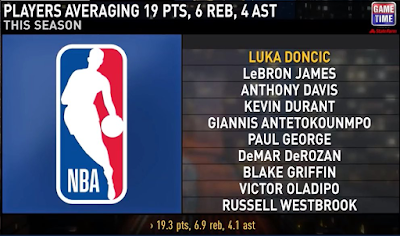 The Mavs blossoming rookie, who is currently averaging 19.1 PTS, 6.6 RB, 4.3 AST is on a statistical pace that can only be described as historic.  There are only ten players in the league that produce at this high a level per basketball-reference.com. His current stat line aligns with top-tier NBA talent. Franchise cornerstones Lebron James, Anthony Davis, and Kevin Durant naturally are included but Luka’s the only rookie outlier. Typically, first-year players aren’t able to sustain these high marks due to the longevity of the season but the Slovenian native has been a pro for three years already. He’s essentially built for this, unlike most rookies who by in large only play against players in their age range.  Luka, on the other hand, was extremely successful against professionals twice his age for multiple seasons.

In just a fourth of the season, the 19-year-old has proven to be the class of the NBA. The effectiveness and overall rhythm of his game are mature beyond his age.  This was on full display versus the Celtics as he embarrassed Kyrie to close out the first quarter:

Notice Luka never panics during this series of moves. The clock is dwindling to a close while he is patiently manipulating Kyrie into an uncomfortable position. As he anticipates the buzzer Irving knows a shot is coming but it’s not enough. The savvy nature of Doncic’s game proves overwhelming as he knocks down the quarter ending three. In an impossible situation, Luka was able to create a relatively open look. For young players that don’t understand how to effectively manipulate the defense this scenario typically ends in a missed contested jumper.  Clips like this provided blatant examples of just how great “The Wonder Boy” can be.

Expecting Luka to maintain this level of production is unfair when compared to other rookies but this isn’t your typical first-year player. His professional background actually makes it more plausible to believe this is only the beginning. Prior to ever playing an NBA minute, Doncics’ had a legitimate Euroleague legacy which was cemented in only 3 seasons (80 games). Most American born ballers would experience competition of this level around their early to late twenties not mid to late teens. This teenager is no stranger to acclaim and pressure.  Not to be redundant but he’s built for this.

If maintained, the stats would place him among Hall of Famers becoming only the 10th player in NBA history to average 19 PTS, 6 RB, 4 AST (basketball-reference.com) for an entire rookie season. 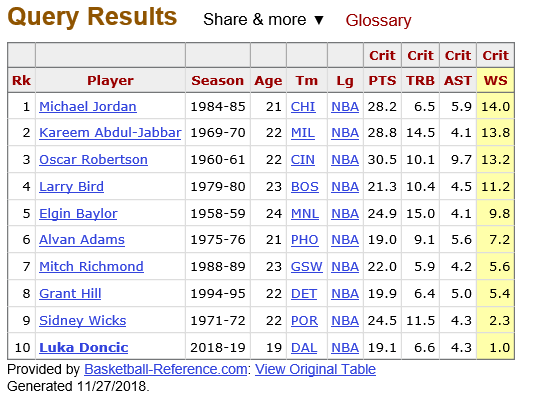 To a degree, it legitimizes his game when its mentioned with names like Kareem, Michael, and Oscar at such a young age. Starting the season on a historic pace garners a high level of respect, expectations and confidence from not only teammates and MFFL’s but the NBA community as a whole. Sustaining this momentum will be crucial to a Rookie of The Year campaign ripe with anticipation and warranted expectations.

If the goal for Doncic is to become an all-time great it’s safe to say “Wonder Boy” is off to a hell of a start!