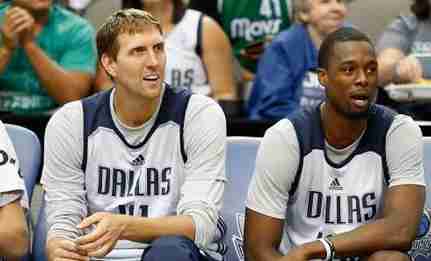 The Mavs will play the 76ers twice in China, but they will be shorthanded by injuries that could drag into the regular season.

The injury bug has bitten the Mavericks already, but that’s nothing new to this team. Last year, Seth Curry was shut down after 1 preseason game and never returned to action. This year, hopefully none of the injuries are THAT serious. As the Mavericks practice in Shanghai to take on the Philadelphia 76ers tomorrow morning bright and early with a 6:30am tip on NBATV, they are missing several key players that would help this team gel in the abridged and funky preseason.

In the first game of this preseason, the Mavs played the Beijing Ducks, blowing them off the court by winning 116-63. While this was fun to watch our guys run amok, it was definitely not against NBA talent. So seeing our squad take on a Philly team who made it to the second round of the playoffs in the East would have been the first true barometer on the Mavs new team. However, injuries don’t care about schedules or team chemistry and we have had a few setbacks occur that will keep our full team from confronting Joel Embiid and Ben Simmons in China.

Harrison Barnes suffered a hamstring injury prior to the first preseason game and will hopefully be back by the start of the regular season. However, being from Dallas, we know how tricky a hamstring injury can be. Just ask Adrian Beltre and Sean Lee. The team is obviously monitoring the situation closely and kept Harrison from making the trip so he can rehab and rest the injured muscle.

Dirk Nowitzki had offseason surgery back in April to clean out one of his ankles. The surgery was done then to have him healed in time for camp, but he suffered a setback with some Achilles soreness to where Dirk has yet to practice with the team. Coach Carlisle has said to the media who made the China trip “This is weeks, not days…we’re not just at a point where we can talk about a hard timeline or anything like that.” So Dirk will not only miss the China trip and the 76ers, we might not see Dirk on opening night. However, the face of franchise did make the trip to China and will be present as the ambassador for the game we know he is.

Of smaller note to most Mavs fans, Ding Yanyuhang who was not practiced yet this preseason with the team will not play in the China games due to right knee tendinitis. Not that he hasn’t earned a training camp shot, but you have to assume signing the Domestic MVP of the Chinese Basketball Association had something to do with having him play in front of the hometown crowd, which now won’t happen.

While he is not injured, it should be noted that DeAndre Jordan did not make the China trip, either, due to a death in his family.

So while the preseason games in China are not relevant to our record or the season overall, it keeps a team that needs time to gel from doing so for all but 1 game of preseason. As fans, we’ll have to wait longer to see our true starting 5 (6 if you count Dirk) and hope that with only 1 more remaining preseason game, our team can learn how to play with each other enough to come out and win in the regular season, avoiding the dreaded 2-14 start we had last year.