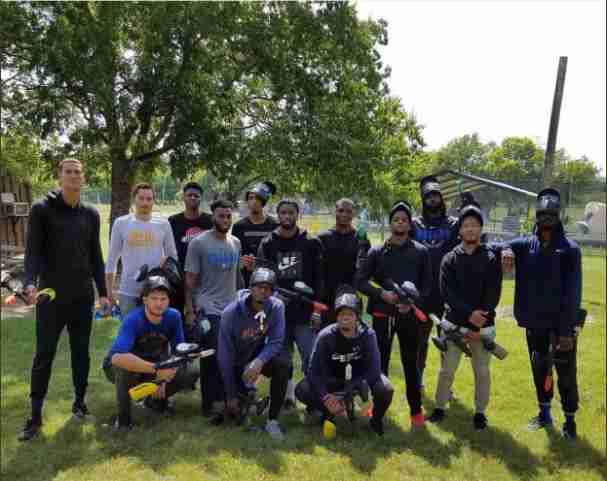 As the team ramps up towards training camp, Mavs new and old are playing together on and off the court to get the team ready for the season.

Spring training OFFICIALLY kicks off for your Dallas Mavericks starting with Media Day on September 21st, but players have been trickling into Dallas to start working out and playing together for weeks already. This would be the UNOFFICIAL training camp that see guys lifting and feeling each other out on the court and getting to know each other as teammates who will basically live together on the road and on the plane from at least September to April. Some of these ways are all work, but other ones are all play.

Outside of the workouts and things posted by the team itself, all of this is unofficial, so we have to go to social media to see what these guys are up to and who all are involved. Following players’ social media is nothing new to the NBA fan, but it gives us a fresh glimpse into what all goes into a young team getting to know each other and building some comradery. We’ll start with things you’d expect and move towards ones that you probably wouldn’t.

Mavs Rookies @Kostas_ante13 @luka7doncic @jalenbrunson1 (and maybe Harrison Barnes and others) having dinner together pic.twitter.com/9tRLzIaVK7

We’ll start with what would be expected, Mavs Rookie Kostas Antetekounmpo posted a Snapchat of a dinner with some of his fellow Mavs draftees: Jalen Brunson and Luka Doncic. The video, while unrevealing in its content, shows some guys getting to know each other in a setting outside the gym which can only be good for guys to talk to each other about something other than basketball before the grind of the season takes off.

The Mavs went paint balling but there was one condition ? ?? pic.twitter.com/lNUonhieId

Next up, we see some more unique team building from Harrison Barnes’ Instagram page where we can see 14 Mavs old and new on a paintballing outing. It’s a good chunk of the team with the notable absences of Dirk Nowitzki and JJ Barea since they were away celebrating the inductions of Jason Kidd & Steve Nash into the Basketball Hall of Fame at the same time. When someone asked Barnes why Dirk wasn’t there, he came back with “We had an age limit for this match” giving Dirty back some of the social media shade he throws out.

It’s nice to see the guys competing both with and against each other as Barnes asked “who do you think won this battle royale?” and Luka Doncic chimed in with his little ‘hand raised’ emoji. Our boys are playing to win even when it doesn’t matter and our shiny new Luka has the brass to jump out and claim victory?? How do you not love that?

And finally, the strangest is saved for last. Apparently Kostas is the MUST FOLLOW for this season as he has ended up on this list twice and training camp hasn’t even started. Kostas posted another Snap of himself and fellow draftee Ray Spalding getting some ‘foot work’ done at a salon. Apparently, it was Kostas first experience, so he HAD to document it. But it just shows the comfort level these guys are already developing with each other.

Outside of just watching professional athletes having fun with their larger than life personalities, it is encouraging to see teammates interacting with ease and having fun. Basketball is a game first and foremost and you play best with a comfort level and familiarity with your teammates. Vets like Wes Matthews and Barnes showing Luka and Kostas how we do things here in Dallas is a great thing you want to build your culture around and these posts show how organically it’s all happening.

PSA: 9 days until training camp starts. 17 days until the first preseason game against the Beijing Ducks.