Mark Cuban and company were very busy this off-season.  We examine two clutch moves that could push the Mavericks into the playoffs. 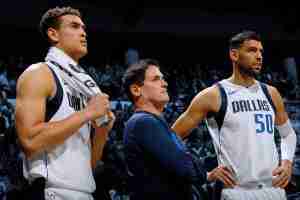 This could be the most productive offseason in the last 5 years for the Mavericks. They have clearly added talent to most of the roster.  Remarkably transforming into a younger more athletic group. We take a look at their two biggest acquisitions this off-season and what we can expect.

I’m reluctant to speak on a player who proclaimed his arrival to Dallas with a cowboy emoji but here goes nothing. To say the hype surrounding DeAndre Jordan varies is an understatement. Some people love him, others loathe him but his talent can’t be denied. Last years second best rebounder saw his stock decline as the league adapts to a more guard-oriented game. Jordan clearly gives the Mavs an added rebounding presence mixed with a defensive intensity so desperately needed right now. Remember we reviewed this last week?  Stats support the notion of defensive execution being a forgotten strategy lately but make no mistake about it, DJ’s addition was made to address that. The signing gives both sides flexibility beyond next season. This is simply too attractive for both sides to pass up. As we zero in on the season its tough to find anyone that would prevent Jordan from starting. His rim runs are a productive mainstay of his game and must continue with the Mavericks. After gathering a defensive rebound, he has the ability to execute pinpoint outlets that foster easy transition baskets. DeAndre won’t be leaned upon to produce baskets on offense but controlling the paint will be paramount. He alone can elevate the teams rebounding and defensive strategy.  Prior to his signing, the team poorly dealt with these responsibilities collectively.  The ability to protect the rim provides an element of intimidation most teams envy. Couple that with his superior rebounding and the paint is on lockdown this season. No question the excitement his game brings will be a crowd pleaser.  The only question is are fans willing to forgive his 2015 free agency faux pas?

Tempering expectations for a top draft pick is a tough ask for any fan base. Although, worthy of the 3rd pick, Luka Doncic’s safest path to stardom may begin on the bench this season. An NBA veteran like Wesely Matthews can be just the crutch a 19-year-old needs. Allowing Luka to gradually acclimate himself to NBA games could prove essential in his development. The speed of the NBA creates a learning curve all rookies must adjust to. Now entering the starting lineup shouldn’t be a complicated process. It’s simply based on his acclimation to this learning curve.  Although benign and mostly boring the NBA Summer League gives not only fans but also players a chance to gauge where their game stands among peers. Luka missed this essential opportunity. I feel its unfair to throw him to the wolves immediately and expect greatness. Development and consistency should be the main focus to start the season. Our guard depth could initially prove to be a saving grace for the young Slovenian native. He will play an additional 52 games this regular season compared to only 30 games with his previous EuroLeague squad. Coming off the bench allows him to gain experience without feeling the immediate pressure his draft status brings.  Dirk is the first player to be named All-NBA First Team and not play at an American high school or college (2001).  To expect the same from our newest rookie is legitimate but should be prefaced with caution. Remaining healthy, gaining confidence and continuing to learn the NBA game should remain key. His talent and winning pedigree cant be challenged which is why I will continue to advocate patience combined with high expectations.

We are about two months from the season beginning and optimism is at an all-time high with fans. Several upgrades were made on the roster and naturally, MFFL’s can’t wait to see this team gel.  I am no different but I always find myself reviewing the sobering rosters of our Western Conference foes.  Teams like the Warriors, Rockets, and Thunder made significant changes just as we did.  It’s disappointing to think even with our upgrades we are only projected to be a low seed playoff team.  Playoff droughts were once a thing of the past so you have to believe more remodeling is on the horizon for this team.