Saturday, February 4th, 2023
THE LATEST
Home Mavericks ‘The Future’ is here, so what’s that mean for your Mavs?

Thursday night was a great night for your Dallas Mavericks. Donnie worked his magic and moved the Mavs from the fifth pick to the third by giving up a top 5 protected pick for next year to get the guy he feels can be THE GUY for the Mavs for years and years to come: Luka Doncic. Luka is a 19 Slovenian wing, dubbed the ‘wonderboy’, who has been playing pro ball in Europe since he was 15 and just became the Eurobasket finals MVP for Real Madrid two days before the draft. Donnie and the gang in the front office think they have a real deal and it seems to draw some uncanny parallels to a certain Euro drafted in 1998 via a trade with the Bucks netting us our franchise superhero: Dirk Nowitzki.

Now as excited as everyone is for Luka to join up with Dennis & Barnes & Dirk, we did draft other high caliber draft picks. Jalen Brunson was taken with the 33rd pick, Ray Spalding at 56 and Kostas Antetokounmpo at 60 (after trading their 54th pick to Philly for the 56th and 60th picks). Brunson was the PG who led Villanova to a NCAA championship this year and has a solid basketball mind and an ability to get his teammates involved. Spalding and Antetokounpo are both long, springy bigs that need some seasoning, but their measurable (and siblings) hold to too much value not to draft and stash up in Frisco.

With these 4 new players drafted to your Dallas Mavericks, what does that do to your roster for next year? This is a question we need answered to know where they need to focus on for free agency which starts at midnight on July 1st. Rick Carlisle has already said that, just like Dennis last year, Luka will start on opening day. You don’t give up a future first round pick for a role player, you do it for a game changer. I think Jalen Brunson has the skill set to join the second team which creates problems for our plethora of guards in our backcourt. The other two draft picks MIGHT work their way into two way contracts during summer league, but I find that unlikely given their plans for the team working into contention again.

So what does that do for the roster that ended last season? Here is how I think it affected the team as last constructed. 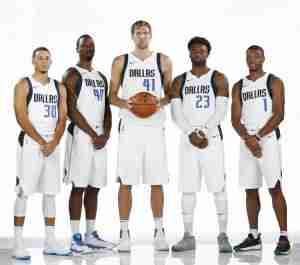 Dirk Nowitzki – Unless we pick up a big free agency center, Dirk is still starting at the 5. If we DO pick up a big named center, expect him to be the “small ball” center on the second unit with JJ & Powell.

Dennis Smith Jr. – Dennis was the primary ball handler last year and has been for his entire basketball life. However, with Doncic’s arrival, he will most likely start playing off the ball more due to Doncic’s excellent court vision and passing ability. Most envision it working like Harden and Paul in Houston. Both will run the point and share time with the ball in their hand so everyone is happy.

Harrison Barnes – Barnes was our leading scorer last year and got some major help from the drafting of Luka. Only problem here is that Luka fits best at the small forward position and while Barnes prefers it, he can also play the power forward position. He will most likely be your starting 4 and it will be up to Carlisle to juggle those two together as he has stated Luka can play 1-4.

Wesley Matthews – This is the last year on his contract and he is regularly being viewed as a trade asset by the media, but not by the Mavs front office. If the Mavs love for Wes lasts through free agency, he’s your starting shooting guard. If not, he brought you a big salary name and Seth Curry takes his starting spot (look for them to sign Seth on a cheap deal given his injury history).

JJ Barea – JJ is under contract for this year and posted a career statistical year last year. Expect him to play mentor to Luka and Jalen while he continues running the point for the second unit.

Yogi Ferrell – Yogi played very well last year and most likely played himself into a nice backup point guard salary. Only trouble is, it most likely won’t be coming from the Mavericks. The drafting of Jalen Brunson probably spells the end of Yogimania in Dallas.

Dwight Powell – He has 2 more years on his contract and unless he is part of a trade, expect him to continue his role as a rim running PF for the second unit with JJ and Dirk.

Doug McDermott – McBuckets is a free agent and will hopefully come back as an immediate scoring threat off the bench. It all comes down to the dollars and cents on whether or not his role on the team makes sense.

Seth Curry – Seth went down in preseason never to return. He is now a free agent with an injury history and tremendous upside. I see a path for a ‘prove it’ one year deal to be all he can be in the backup shooting guard role. Unless Wes gets traded in free agency, then he’s a lock to start at the 2.

Dorian Finney Smith – Dodo is on the books for one more year and will play it out with whatever wing minutes remain down the bench.

Salah Mejri – Salah is a free agent and if he will take a minimum contract, I can see him staying on the bench. With the Mavs wanting to upgrade the center position in free agency, he is squarely on the chopping block.

Maxi Kleber – Maxi might be the victim of Barnes pushing him down the depth chart. I do not predict him staying with the Mavericks as he plays the 4 with Barnes, Dirk and Powell all in front of him.

Jonathan Motley – Motley SHOULD be at the end of the bench if Carlisle believes in him. I do not get the feeling he does yet, so he ends up either with the Legends or on a two way contract. I don’t see him being on the opening day roster.

Kyle Collinsworth – Kyle is a free agent and played well last year, but his minutes have been eaten by the new additions to the team. He gone.

Jalen Jones & Antonius Cleveland – Both were on two way contracts and neither will be a part of the opening day roster. They gone.

So with all that said, the Mavs are looking to upgrade at the center position as well as add a quality wing role player that can help them get back in contention. There’s more changes coming for this team and free agency is only 6 days away!!!! Hope has arrived in the DFW Metroplex and not a moment too soon!